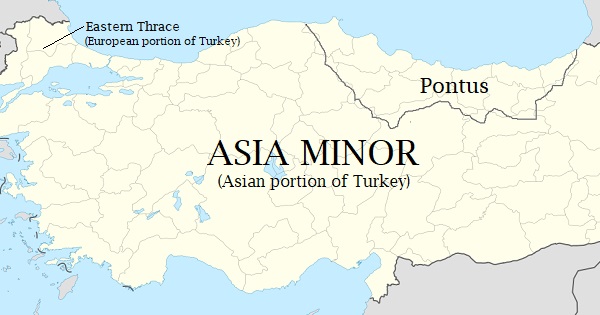 Pontus (Gr: Πόντος) is the name of an historic region situated on the Turkish Black Sea coast and was home to a large Greek population. Prior to the genocide these Greeks self-identified as Romaioi (Gr: Ῥωμαῖοι) or Rûm, in other words descendants of the Eastern Roman (or Byzantine) Empire. Today they are often referred to as Pontic Greeks or Pontians. Pontus is a region of Asia Minor.

During the Greek Genocide
Like other regions within Ottoman Turkey, the Greeks of Pontus were subjected to a genocidal campaign. The Austrian Ambassador of Constantinople, Markgraf Johann Pallavicini, described the events in and around Samsun in December 1916 as follows:

On 29 December 1918, the Archbishop of Amasya and Samsun, Germanos, wrote:

"Towards the middle of December, 1916, began the deportations from Amissos (Samsoun). First of all the army reduced to ashes all the region round about... A large number of women and children were killed, the young girls of the nation outraged, and immediately driven into the Interior... The majority of course died on the road and none of the dead at all being buried, vultures and dogs feasted on human flesh.. Believe me... that out of 160,000 people of Pontus deported, only a tenth and in some places a twentieth have survived. In a village, for example, that counted 100 inhabitants, five only will ever return; the others are dead. Rare indeed are those happy villages where a tenth of the deported population has been saved."5

According to figures compiled by the Greek Patriarchate in Constantinople, by 1918 257,019 Greeks from the Pontus region of Asia Minor had been deported to the interior.6 At the end of 1921, some Greek sources placed the Pontus death toll at 303,238.7

Death toll in the Pontus region according to ecclesiastical provinces.

At times, the Greeks of Pontus took up arms in acts of self defense to resist the massacres being perpetrated against them. In this respect, Pontus makes an interesting case study of the Greek Genocide much like the resistance demonstrated at Van by Armenians during the Armenian Genocide.

Only 182,169 Greeks of Pontus were ever recorded as having reached Greece.8 In 1925 George K. Valavanis wrote:

".. the total human loss of Pontians from the [beginning] of the General [Great] War until March 1924 can be estimated at three hundred and fifty three thousand [353,000] [persons], murdered, hanged and dead through punishment, illness and privations." 9

However, if one gives consideration to the various estimates for the region's pre-war population and the migration of Pontians into both Russian territory and Greece, it is clear that Pontian deaths are unlikely to have ever reached such a figure. A more reasonable estimate might be 250,000 which indicates that approximately 50% of the total population was killed.