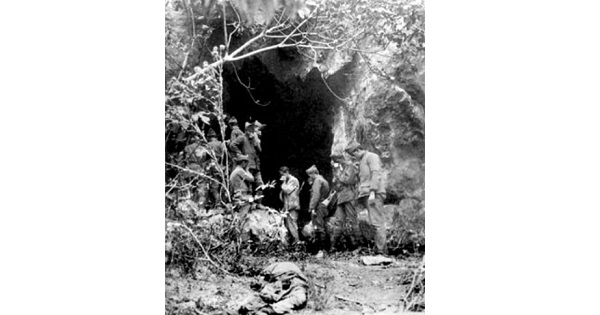 The cave where the bodies of slaughtered Greeks were found, İznik 1920.

The town of İznik (Gr: Nicaea) is situated 90 km south east of Istanbul and was part of the historic region of Bithynia. It sits on the eastern shoreline of İznik Golu (İznik Lake) and was the site of two ecumenical councils in 325 and 787. The Greeks of İznik were massacred by Kemalist forces in August 1920. The massacre was one of a series of massacres in the general İzmit region. The massacres are sometimes referred to as the İzmit Massacres.

On the 27th of August 1920, a large band of Nationalists under the command of a certain Djemal (spelt Cemal) surrounded the Greek precinct of İznik, seized the entire Greek population numbering about 600 and massacred them.1 Some victims were led out of İznik past Lefka Kapusu where they were slaughtered en masse. The bodies were later found thrown in wells while others were burnt and found piled up in a cave.

Thomas Anastasiadis survived the İznik massacre and in an oral interview he recounted:

For 75 days the çetes had blocked off the Greek neighborhood of Nicaea. Nobody could leave. They had placed objects blocking the four exit gates of the town. The entire town of Nicaea was closed in. On the 14th of August [1920], on the eve of the feast day of the Virgin Mary, the day on which our church celebrated, the çetes gathered all the Greeks of Nicaea, 87 families, and lead them out of Lefke Kapusu, eastwards, to the pastures. There they were all slaughtered with German bayonets. They threw the bodies inside a cave and burnt them. They didn't spare the church either; they destroyed it. They raped women on the altar. Twenty days after the slaughter, the Hellenic Army entered the town and stayed for 3 days then left. They did  not retaliate on the local Turks who were not to blame for what happened.2

The testimony of Haralampos Pliziotis, a member of the Hellenic army revealed the extent of the massacre:

A few of us went for a walk outside of Nicaea to look for the slaughtered Christians. On the ground, we saw heads, hands, legs and other body parts scattered all over the place. Anyone that witnessed it would have lapsed into a state of delirium. A little further down we saw three wells filled with bodies from top to bottom. Then finally we found the cave where we saw roughly 400 bodies of varying ages, piled up, slaughtered in different ways. We couldn't stay even a single minute as we began feeling dizzy and on the verge of being sick. We immediately left and went to the Greek neighborhood which was terrifyingly quiet, and then went to the church of Saint Sophia, an old Byzantine church, but couldn't tell if it was a church or a barn.3

Stathis Lolosidis was a native of İznik and was able to witness the massacre of his town-folk by hiding behind a bush. He recounted:

They slaughtered the men with great knives chopping at them; and the women - starting with little girls of six years old to elderly women - they would rape and then slaughter... Up until noon they raped and they butchered and turned human flesh into tiny little pieces and then they brought carts and picked up the body parts. From my own family they killed my wife Olga, my mother Sofia, my brother Kostas, my child Sofia. I had no one else. 4

War correspondent Kostas Faltaits interviewed one of the few survivors of the İznik massacre and compiled a list of victims' names.

Further reading:
The Massacre of Greeks at Fulacik, June 1920.
These are the Turks
Ortakoy, Bithynia: The Massacres and the Uprooting
17 Apr 1921: The Black Book of Nicaea, Embros