George Dilboy: The first Greek-American to receive the Medal of Honor 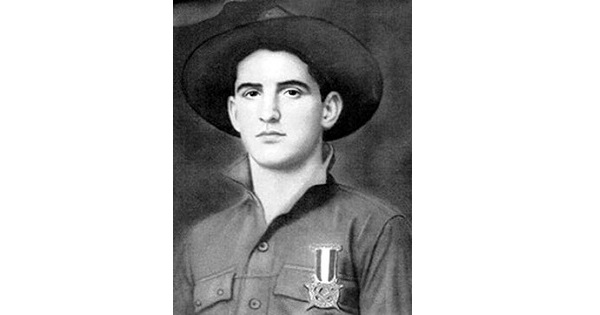 George Dilboy (Gr: Γιώργος Διλβόης) was born in 1896 in the Greek town of Alatsata (Tr: Alaçatı) near Smyrna (Tr: İzmir) in Asia Minor (today Turkey). He and his family immigrated to New Hampshire in the United States in 1908. In 1912, at the age of 16, he returned and fought for Greece in the Balkan Wars of 1912-13. He returned to the U.S and joined the New Hampshire National Guard and served in the Mexican Border Campaign. When the U.S declared war against Germany in 1917, he joined the U.S Army and served in the 103rd infantry regiment, 26th Division. Before turning 22 years of age, Dilboy had fought in four wars in three continents.

In 1918, Dilboy fought in the Battle of Belleau Wood in France. After his platoon had gained its objective along a railroad embankment, Private First Class Dilboy, accompanied his platoon leader to reconnoiter the ground beyond when he was suddenly fired upon by enemy machine-gun from 100 yards. From a standing position on the railroad track fully exposed to view he opened fire. He failed to silence the gun and rushed forward with his bayonet fixed through a wheat field toward the gun emplacement. He fell within 25 yards of the gun with his right leg nearly severed above the knee and with several bullet holes in his body. With undaunted courage Dilboy continued to fire into the emplacement from a prone position killing two of the enemy and dispersing the rest of the crew.1

Dilboy was initially buried in the Aisne-Marne American Cemetery in France but at the request of his father he was later buried at his birthplace Alatsata in Turkey. Thousands attended his funeral. In 1919, Dilboy was posthumously awarded the Congressional Medal of Honor by the President of the United States, becoming the first Greek-American to be awarded America's highest decoration for valor. In 1922 when the Kemalist Army occupied Alatsata, Turkish soldiers broke open Dilboy's coffin entombed in the Church of the Theotokos and desecrated Dilboy's remains and the U.S flag. U.S President Warren G. Harding was enraged and ordered a U.S warship to recover the remains and brought them back to the U.S where they were interred at Arlington Cemetery on November 12, 1923 in a ceremony attended by many dignitaries. Harding also demanded and received a formal apology from the Turkish Government. Dilboy has been honored by three U.S presidents; Woodrow Wilson who signed the authorization awarding him the Medal of Honor, Warren Harding who brought him back, and Calvin Coolidge who presided at his final burial. Dilboy was buried with full military honors.

Carved in Stone: The Story of George Dilboy
Georgie! My Georgie!: The First Greek-American to Win the Medal of Honor