Greek Relief Committee: The American Response to the Greek Genocide

The NER contributed funds to the Greek Relief Committee and engaged in providing relief to Ottoman Greeks which is why the word 'Greeks' featured on many NER fundraising posters. Both the GRC and the NER shared offices at 1 Madison Ave, New York and a number of of their members were on both committees. Chairman of the Greek Relief Committee was Frank W. Jackson, a US born attorney who was Consul to Greece from 1901-03. Among the Board of Trustees was Mr. Henry Morgenthau, former US Ambassador to Turkey and Mr. Abraham E. Kazan, the uncle of famous Greek-American film director and writer Elia Kazan. In 1921 the GRC ceased to exist and its operations were handed over to the NER which continued on with Greek relief. 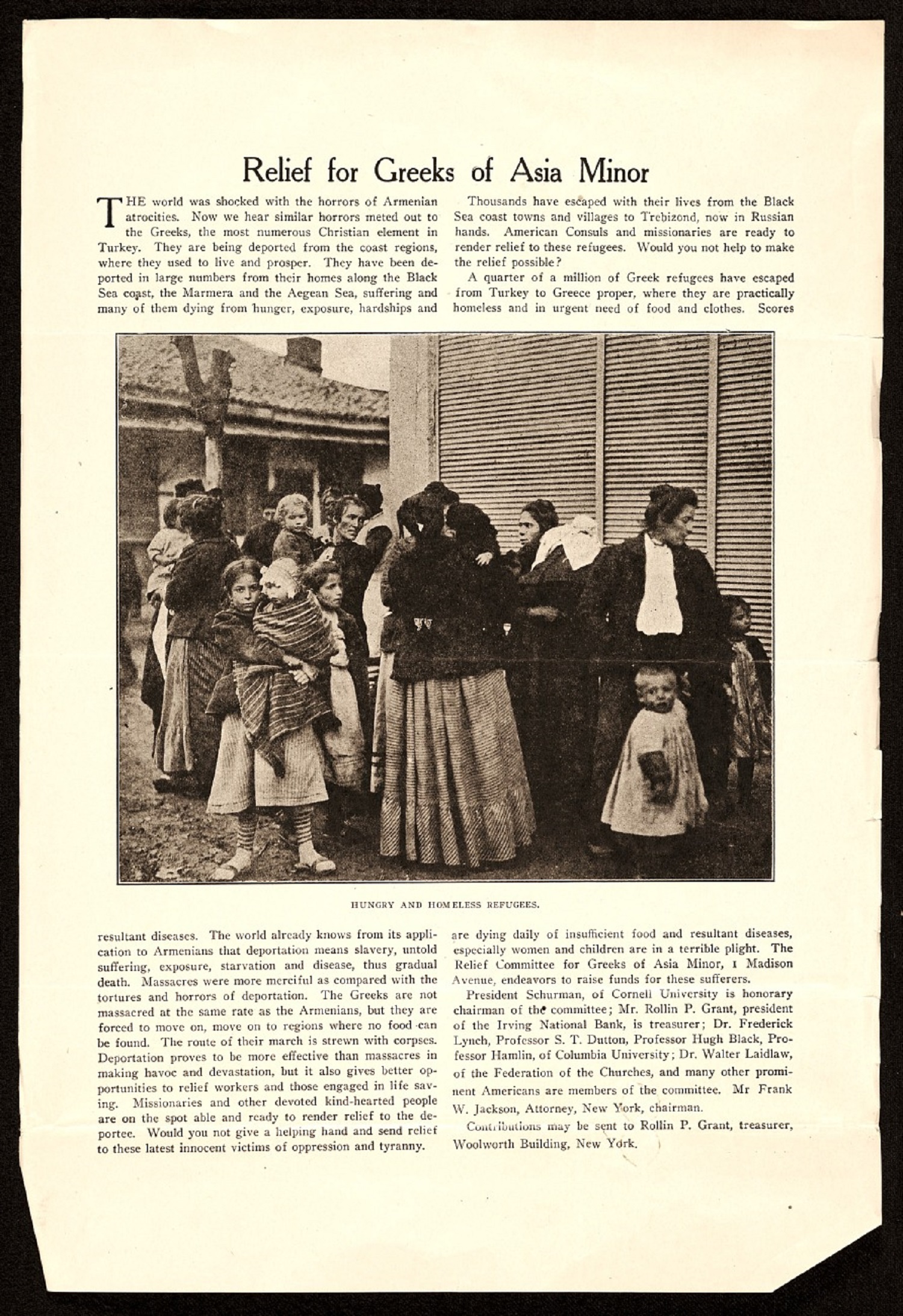 The following leaflet (circa 1918) was distributed by the Greek Relief Committee to raise funds for Greek Genocide survivors. It reads:

Relief for Greeks of Asia Minor

The world was shocked with the horrors of Armenian atrocities. Now we hear similar horrors meted out to the Greeks, the most numerous Christian element in Turkey. They are being deported from the coast regions, where they used to live and prosper. They have been deported in large numbers from their homes along the Black Sea coast, the Marmara and the Aegean Sea, suffering and many of them dying from hunger, exposure, hardships and resultant disease. The world already knows from its application to Armenians that deportation  means slavery, untold suffering, exposure, starvation and disease, thus gradual death. Massacres were more merciful as compared with the tortures and horrors of deportation. The Greeks are not massacred at the same rate as the Armenians, but they are forced to move on, move on to regions where no food can be found. The route of their march is strewn with corpses. Deportation proves to be more effective than massacres in making havoc and devastation, but it also gives better opportunities to relief workers and those engaged in life saving. Missionaries and other devoted kind-hearted people are on the spot able and ready to render relief to the deportee. Would you not give a helping hand and send relief to these latest innocent victims of oppression and tyranny.

Thousands have escaped with their lives from the Black Sea coast towns and villages to Trebizond now in Russian hands. American Consuls and missionaries are ready to render relief to these refugees. Would you not help to make the relief possible?

A quarter of a million of Greek refugees have escaped from Turkey to Greece proper, where they are practically homeless and in urgent need of help and clothes. Scores are dying daily of insufficient food and resultant diseases, especially women and children are in a terrible plight. The Relief Committee for Greeks in Asia Minor, 1 Madison Avenue, endeavours to raise funds for these sufferers.