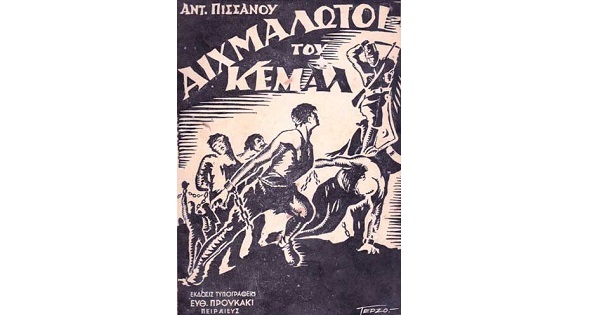 Antonios Pissanos was captured at Smyrna by Kemalist forces in September 1922 and made a prisoner of war. He was placed in a group of 3,000 men and sent to the interior of Turkey. Along the way many of the prisoners were slaughtered while most of those who survived later died of disease and malnutrition. In the chapter titled A Real Slaughter of Humans, Pissanos recounts when Turkish guards stopped the group somewhere in the interior and began a slaughter of prisoners. He wrote:

Meanwhile the other Turks have gone rabid. They start grabbing prisoners and slaughtering them. A soldier orders a prisoner to start running. The unfortunate man stands hesitantly. The soldier then hits him hard with a whip. The prisoner begins to run like a crazed man. They lift their riles and shoot him. Within a few meters he falls to the ground, dead.

After that celebration, the Turks ordered us to stand. "Don't be afraid" they told us, "we won't touch anybody else." We got up. Beside me was Kontaksi. The Turkish Cretan who was doing all the slaughtering approached us. I didn't dare lift my head to look at him. I heard him saying: "Come here you." I thought he was talking to me. I felt that my final hour had arrived. But he was talking to the unfortunate Kontaksi, the telegraph worker. He grabbed him by the hand and said to him: "Come here giaour (unbeliever), let me tell you something." He then takes him two meters away from the line. "You look Armenian, I can tell by your face" he says to him. Kontaksi is shocked and takes exception as he realizes that there's a chance Greeks might be spared but not Armenians. But the Turk doesn't listen. He jumps on top of Kontaksi like a rabid animal and grounds him. Then immediately like a bolt of lightning he pulls out a knife, a knife that had been sunk into the flesh of many Christians that day and begins to stab his victim mercilessly as his victim screams and begs in vain. The wicked man doesn't stop until he notices that the injuries were so severe that death was inevitable. He turned to us and said: "That jerk was Armenian." But who would dare tell him he was wrong at that moment? I will never forget those final moments, and the torture that the unlucky Kontaksi had to endure.

Further reading:
The Treatment of the Greek Prisoners in Turkey
The Number 31328: The Book of Slavery
17 Jul 1923: Thousands of Greeks Disappear, Advocate
Did the Kemalists sell the bodies of Greeks and Armenians for industrial use?
Prisoner of the Turks