The Great Betrayal: A Survey of the Near East Problem 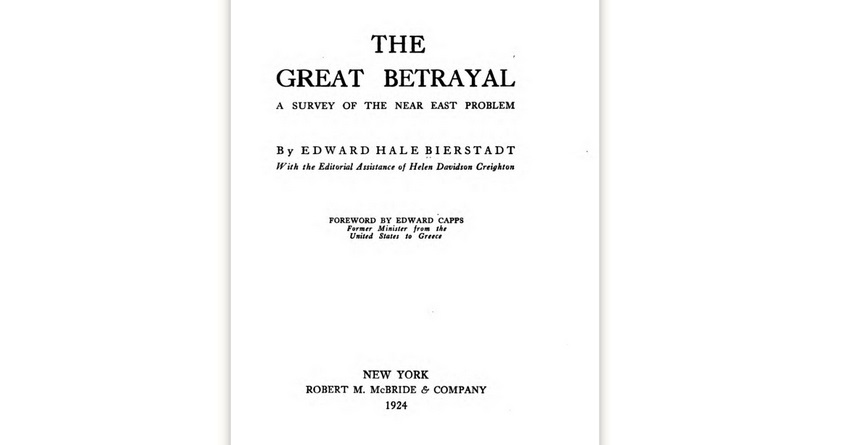 Edward Hale Bierstadt was Executive Secretary of the Emergency Committee for Near East Refugees, one of the groups that assisted the survivors of the Greek Genocide. In this tell-all, Bierstadt chronicles aspects of the destruction and extermination of the Christian populations of Ottoman Turkey; the Greeks, Armenians and Assyrians, firstly by the Union and Progress cabal and then by the forces of Mustafa Kemal. Bierstadt exposes the rivalries and competing economic interests between the Allied Powers in the aftermath of World War I, how they failed to demand from Turkey the protection of its Christian minorities and how they chose to negotiate economic treaties rather than hold Turkey accountable for the slaughter of its own citizens. During the publication of the book, the US State Department wrote to the publisher referring to "grave errors" in the work. Despite this, the book was  published.
Contents

I.   Economic Imperialism and the Near East
II.  The Truth About Smyrna
III. The Christian Minorities Today
IV.  America's Philanthropic Investment In The Near East
V.   Some Sources Of Turkish Propaganda
VI.  Tendencies Of The United States Naval Policy In The Near East
VII. The Part Greece Has Played
VIII.The Econonic Factor Of The Near East Problem
IX,  The Historical Background Of The Near East
X.   Fixing The Responsibility
XI.  What Shall We Do Now?

The nations want oil, because oil means money, and because it may well prove to be a deciding factor in another war. The minorities, the Armenians and the Ottoman Greeks, were either dead or in exile, destitute, naked and starving, and the public of America was straining every nerve for their relief. But, in the face of this, our representative at Lausanne was instructed to negotiate an economic treaty with Turkey. Our solemn promises to the Armenian people and to the Greek nation were set aside in favour of commercial relations.  (pp. 15-16).

The (Lausanne) treaty was signed in oil and sealed with the blood of Greeks and Armenians. (p. 175).