The Treatment of the Greek Prisoners in Turkey 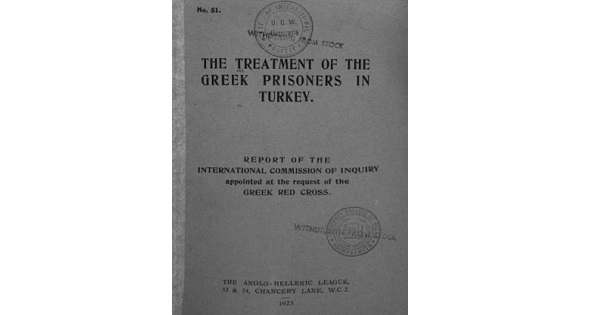 THE TREATMENT OF THE GREEK PRISONERS IN TURKEY
REPORT OF THE INTERNATIONAL COMMISSION OF INQUIRY APPOINTED AT THE REQUEST OF THE GREEK RED CROSS.
The Anglo-Hellenic League, London 1923.

Following the destruction of Smyrna in September 1922, Kemalist authorities refused males of military age passage out of Turkey. These men were deported to the Turkish interior where they were enlisted in work battalions and subjected to acts of abuse and slavery. It's believed over 100,000 males were deported. The majority of them perished.

In 1923 an International Commission of Inquiry investigated the treatment of the Greek prisoners who returned to Greece from Turkey. Most of them were in a state of complete exhaustion. Doctors who treated them referred to them as 'living ghosts' or 'walking skeletons'. The Commission concluded that their treatment was 'a flagrant violation of the laws of war', and some acts were in contravention of the Geneva Convention.

The following is the testimony of Emmanuel Ziraki and Nicolas Zacharenaki who managed to make it out alive.

Those who were not able to keep up with the march were killed on the spot. The same happened to anyone daring to walk for a moment out of line. On our weary march we encountered also the dead bodies of women, young girls, and civilians. On our arrival at Brusa [Bursa] we were maltreated by the enraged Turkish population and we were even pursued as far as the military barracks where they housed us.1

One of the most notable survivors of these prisoners was Elias Venezis. who was enslaved in a work battalion just around the time of the Smyrna Holocaust. Of the 3,000 conscripted into his labor brigade only 23 survived. Venezis described the ordeal in his autobiographical testimony titled To Noumero 31328.

More information on the treatment of these prisoners can be found in the United States Department of State Papers. The following correspondence between Greek and American officials from those papers also highlights their persecution:2

The Representative of the Greek Government (Vouros) to the Chief of the Division of Near Eastern Affairs, Department of State (Dulles).

MY DEAR MR. DULLES: I beg to inform you that my Government has instructed me to lay before the American Government an urgent protest against the order of the Kemalists for the deportation of the male Christian population in the interior of Asia Minor.

The refugees, who up to the present moment, have arrived in Greece and who exceed half a million, are exclusively women and children under 15 years of age, or aged men above sixty. This separation of the heads of families from their own families, who thus remain without support, makes the work of relief exceedingly difficult.

An elementary humanitarian duty imposes to the Christian world to come to the assistance of these Christians thus deported to the interior of Asia Minor.

My Government believes that it is advisable that committees be constituted by the International Red Cross and eventually also by the League of Nations and other organizations, especially American, which shall be entrusted with the duty of following the fate of these unfortunate populations and save them from certain death which will be the inevitable result of the exactions inflicted upon them.

According to existing information the deported exceed one hundred thousand men.

The Greek Government has already addressed in the above sense an appeal to the International Red Cross and the League of Nations. It considers, however, that it would be of real effect if the Allied Great Powers use all their influence with Khemal to the effect of saving these deportees and that they were willing to assist in the manner they deem advisable, the work for the relief of these unfortunate ones.

Trusting, my dear Mr. Dulles, that you will be kind enough to bring the above appeal to the attention of the American Government, I beg [etc.]

1. The Treatment of the Greek Prisoners in Turkey: Report of the International Commission of Inquiry appointed at the Request of the Greek Red Cross. Anglo Hellenic League, London 1923, p.71.
2. United States Department of State Papers Relating to the Foreign Relations of the United States, 1922. Volume II, 867.4016/724. U.S. Government Printing Office, 1922, pp. 940-941.

Further reading:
The Number 31328: The Book of Slavery
17 Jul 1923: Thousands of Greeks Disappear, Advocate
Did the Kemalists sell the bodies of Greeks and Armenians for industrial use?
Prisoner of the Turks
Prisoners of Kemal