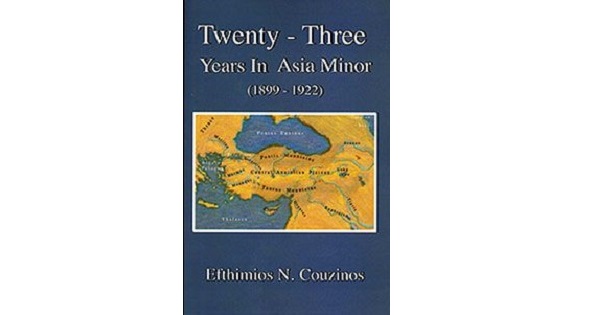 This memoir by Efthimios Couzinos detailing his 23 years in Asia Minor is an amazing story of human survival. Growing up as an Ottoman Greek Christian in what is today Turkey, Couzinos was a loyal subject of the Ottoman Empire who did his military duty, could read and write Turkish and Arabic, and obeyed all the laws of the land. But despite this – Couzinos - like thousands of other Greek men, women and children, were marked for extermination by the tyrannous and cruel Turks, and his life subsequently was to change for the worse.

Efthimios N. Couzinos, of Alacham (today Alaçam), was raised by a wealthy Greek family and attended the American School of Merzifon (Anatolia College). When the Young Turks came to power in 1908 and preached equality for all those living within the Empire, Couzinos felt his future was bright and he had everything to look forward to. But things soon changed drastically. By 1915, the Young Turks ordered the extermination of all Armenians living within the Empire. Amongst those was Couzinos’ Turkish language teacher, Professor Kojayan. Couzinos recalls the day he learnt of the fate of his teacher:

The dreadful news reached us that summer in Alacham. On August 10, 1915, all the Armenian professors and teachers at Anatolia College, with their families, plus 15,000 Armenians from Merzifon, were forced to join a procession of deportation. Three days later, on the outskirts of the city of Zile, they were butchered!  My good and innocent professor Garabed K. Kojayan was among them! 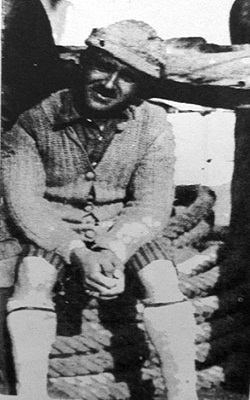 These were horrific and life changing times for a sixteen year old and before long, Couzinos (pictured right) was drafted into the Ottoman military. It was during this time that Couzinos witnessed Greeks being put into ‘road construction gangs’ with nothing more than a loaf of bread to eat daily. He learnt that 90% of the men in these gangs perished. In the big square of Bafra, Couzinos witnessed 27 young Greek men aged 18-20 hanging by their necks, one of whom was his acquaintance George. At one stage Couzinos was even thrown in prison.

From the top of the Anatolia College building in July of 1921, Couzinos listened and watched as Topal Osman and his 500-strong ‘gang of demons’ entered the town of Merzifon and for three nights, entered Greek homes and pillaged, and ravished women in scenes of agony that were, as Couzinos states, ‘beyond my ability to describe’.

After seeing Greek teachers and fellow students of the college campus taken away and hanged, Couzinos knew he was next, so he decided the only way to survive was to hide. One night, he entered a little hole under the floor of the campus kitchen. Couzinos was to hide in this ‘hole’ for a staggering 515 days. His test of endurance is an indication of the strength of human will and the lengths a human being will go to, in order to avoid an impending death.

When Greeks were finally allowed to leave Turkey, men older than 16 were refused exit. Couzinos, who at this stage was 22, was faced with another hurdle; how to leave without being caught. But he escaped, albeit with a stroke of luck. On his passage to the port of Samsoun (today Samsun), Couzinos witnessed the dead carcasses of his country folk and wrote:

The roads leading to Samsoun and to the coast were filled with remnants of the massacres of the previous two years. They consisted mostly of women and children and old men. As we mentioned before, the young men and able bodied Greek men were put to death.

On his passage to the port, Couzinos also passed his family’s luxurious home. The cruel Turks had not only done away with the Greeks in the most heinous fashion, they now moved into their homes. He recounts:

Next to the church loomed majestically our beautiful and imposing palatial home where I was born (on the second floor) and had lived for eighteen years. So many beautiful memories... But who is there now?  The Turkish mayor of course. I could almost ‘see’ him walking back and forth on the third floor banquet hall, rubbing his hands and mumbling something in Turkish. I could nearly vouch that what he was saying was this, “I am the most fortunate official in this town. After so many years of planning, cunning and falsehoods and hypocrisy, I made it! I got into the most beautiful house in Alacham with all the furniture intact and with sixteen oriental rugs, and furthermore, it did not cost me even a para (penny). The palatial house is a worthy gift to me, because I got rid of all the Greeks in Alacham!"

Couzinos eventually made his way to America where he spent much time speaking about his ordeal. His story was so powerful that the Near East Relief organized public talks for him at churches, clubs and hotels, to tell his story so that the American public could hear first-hand, what really happened in the final years of the Ottoman Empire. He also furthered his studies, graduated and became a teacher and government clerk. His memoir, eloquently written in English, is a Greek Genocide survivor account which must be read by anyone with an interest in the genocide carried out by the Turks on their Ottoman subjects (Greeks, Armenians, Assyrians, Yezidis, Jews etc).

Further reading:
The Samsun Deportations
Turkish Atrocities in the Black Sea Territories
Black Book: The Tragedy of Pontus
Efthimios Couzinos: The Greek lad who hid in a hole for 515 days to escape the Kemalists
Simeon Ananiades: A Greek lad hanged in Kemalist Turkey