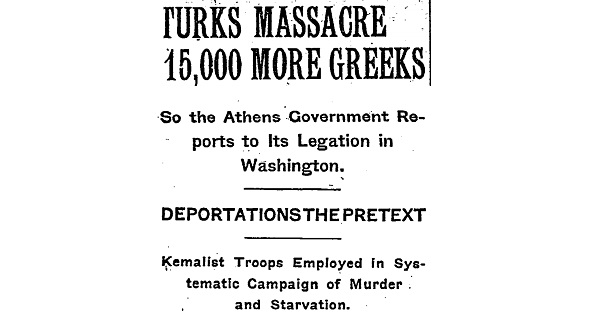 TURKS MASSACRE 15,000 MORE GREEKS
So the Athens Government Reports to its Legation in Washington.
DEPORTATIONS THE PRETEXT
Kemalist Troops Employed in Systematic Campaign of Murder and Starvation.

Special to The New York Times.
WASHINGTON.  JUNE  13. -  In  a  dis-
patch  received  by  the  Greek  Legation
today  the  Greek  Government says that
Athens  is  filled  with  a  deep  sense  of
horror over the massacre of 15,000 men,
women  and   children  by  Turks  in  the
district of Rhodopolis.
This  information is   particularly inter-
esting to   Washington, as the   United
States  Government  has agreed to join
the British,   French and Italian Govern-
ments in  an investigation   of   Turkish
massacres..
The  dispatch  says  that the Greek Gov-
ernor of Sokia  reports  that  five Greeks
who  escaped  from  Geronda, in  the  in-
terior   of  Asia  Minor,  brought   tidings
that the whole Greek  population in that
part  of the country has  been  deported
toward   the furthest interior,  in  the  di-
rection of Mougla. The dispatch adds:
"On the way  they are being gradually
massacred.  The   women   and children
are herded together in a few houses and
there   left   to   die  of   starvation. Prior
to this the women are forced  to   dance
for the  amusement of the  Turkish  rab-
ble, and  the   violation of  women, girls
and   young boys is   carried on in   the
most abominable manner."
Persecution of Greeks in the Pontine
region,   depositions  of refugees from
Trebizond   state,  continued   without
abatement. The district   of Rhodopolis
has been surrounded by Turkish troops
and   bands   of   wild   irrgulars.  The
Metropolitan of that See  and his flock
are shut up in their  dwellings  and are
said  to  be in danger of starvation.  A
fortnight ago  irregulars  and   Turkish
troops invaded several villages of that
part of the country, the cablegram said,
and, violating the women and robbing
and murdering the other inhabitants,
set fire to the houses.
The monks of the  Monastery of Peri-
steriota   were   delivered over   to the
irregulars, who pillaged all the precious
objects and carried off all the cash in
the monastery.
The dispatch says  that persecutions
are directed chiefly  against the eastern
villages of the Trebizond area.
"The  fariest  portions   of Asia Minor
are now  reduced  to   a   smoking and
howling  wilderness the l ike of   which
the civilized world perhaps never before
in history has  had  brought  to   it s at-
tention," the Greek egation declares.
Another  official  cablegram says that
Dr. Dalolio,  an Italian  physician of the
Italian  Red  Cross, has  just arrived  in
Athens from Makri and has made known
to  the   authorities   an  account of Ke-
malist atrocities which "he saw with his
own  eyes."  This  physician  is  said  to
have  confirmed  the  reports  that the
atrocities  are  carried  out  according to
a  premeditated  plan  of  eliminating  all
traces  of  elements  which are not Mus-
ulman.  Every  male inhabitant between
the ages of 12 and 85 years is deported
into  the  interior  and  forced  to march
for  forty  days  to  Fonjah  and  Malatin,
or assigned to forced labor.