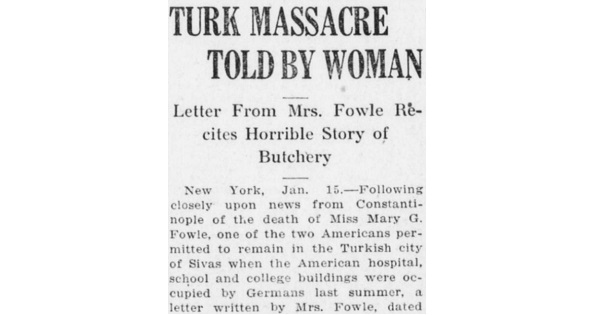 New  York,  Jan.  15.  -   Following
closely  upon  news from Constanti-
nople  of  the death of Miss Mary G.
Fowle, one of the two Americans per-
mitted to remain in the  Turkish  city
of Sivas when the American hospital,
school and college buildings were oc-
cupied by  Germans  last summer, a
letter  written  by Mrs. Fowle, dated
July 7, has  just  been received here.
The letter recites in detail a vivid tale
of massacre in the interior of Turkey
when men  and  women persisted in
maintaining their religious beliefs and
refused to change their names.
On Monday, June 26, the letter says,
all the native laborers who  had been
working on the roads were taken into
custody. On the following day  more
than 3,000 men were crowded into a
military   prison,  without  food  or
water.  Later some 200 artisans and
servants were released upon condition
that they  change their names. Press-
ure was brought to bear upon others
and continued for ten days, until the
majority of the prisoners yielded.
Prisoners brought to the military
prison from  villages, the  letter set
forth, had no  changes of  clothing.
Miss Fowle and  her only  American
companion,  Miss  Mary  L. Graham,
aided these unfortunates as best they
could. Later the prisoners were sent
to Bozanti on the German railroad.
The letter continues:
"The prisoners went off in groups
of 200 to 300 per day. When the first
group started off in daylight, with only
a few escorts, we felt reassured.  By
Sunday 1,000 had gone. Early  Thurs-
day morning came  reports  that  all
who left Sivas had been massacred.
We  did  not  believe  it at  first. We
have now seen one eyewitness who
escaped  and  two  others  who had
heard this news with  but  one  inter-
mediary. We all feel  convinced now
that there have been massacres.
"The men were apparently taken
out two by two and delivered into the
hands  of villagers  armed  with axes,
pikes, saws and  other weapons. Our
second  account  said  the  prisoners
were stood  up,  bound and shot. Our
informant managed to roll into a gully
and escape, although he was shot at.
He reported seeing half-burned arms
and legs and heads in the gully as he
passed through.
"Now  when  prisoners   ask   us
whether to change their names or be
sent off we don't dare say no."

Note: Miss Mary Caroline Fowle (1881-1916) was born in Caesarea (today Kayseri) in Ottoman Turkey and was a missionary for the American Board of Commissioners for Foreign Missions. She studied at Woburn Masachusettes High School and graduated from Mount Holyoke College in 1903. She was fluent in Turkish and spent most of the last 10 years of her life there. In 1906 she spent time teaching at the Adabazar Girls' High School while in 1910 she taught at the Sivas Girls' High School. She died of Typhus on November 24, 1916 while at Sivas.

Bozanti or Pozanti was a prison camp situated 38 miles NW of Adana in south eastern Turkey.