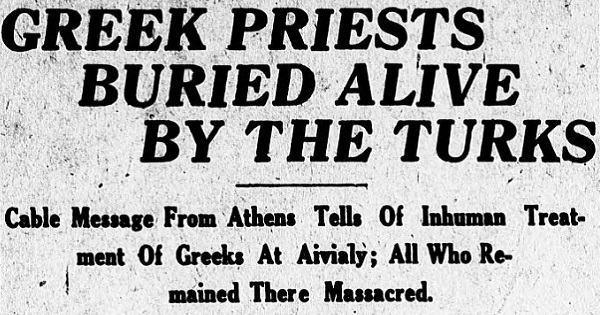 GREEK PRIESTS BURIED ALIVE BY THE TURKS
Cable Message From Athens Tells of Inhuman Treatment
of Greeks at Aivaly; All Who Remained There Massacred.

Washington, Nov. 2. - The Greek  metropolitan  and ten
priests, captured by the Turks  at Aivaly, were buried  alive be-
cause they refused to embrace Islamism, according to a cable-
gram received today from Athens by a Greek legation.
MASSACRED OTHERS
Word  also  has  been received in Athens  the message said,
that  all  Greeks  who remained  in Aivaly and  on the  islands of
Moschonissia have been massacred and that wells in the vicinity
"are filled  with  bodies  of  young girls,"  who  drowned them-
selves to escape the Turks.
MANY DEPORTED
Christians  in  Smyrna between the ages of 18 and 60, the le-
gation was informed, have been deported and forced to hard la-
bor, hundreds dying from hunger and fatigue.