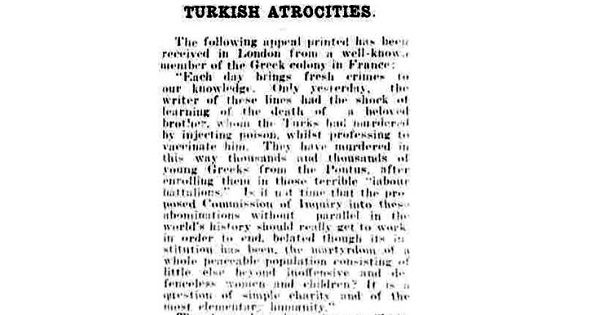 The following  appeal  printed has been
received   in London  from a  well-known
member  of the Greek  colony  in France:
"Each   day   brings   fresh  crimes   to
our   knowledge.   Only   yesterday,  the
writer of these lines  had   the  shock  of
learning  of  the  death   of   a   beloved
brother,  whom the Turks had murdered
by  injecting  poison, whilst professing to
vaccinate  him.  They  have murdered  in
this  way  thousands  and  thousands  of
young  Greeks  from  the  Pontus,   after
enrolling  them in  those  terrible  "labour
battalions".  Is  it  not  time that the pro-
posed  Commission  of  Inquiry into these
abominations    without   parallel  in   the
world's history  should  really get to work
in  order  to  end,  belated though its in-
stitution has  been,  the  martyrdom of a
whole peaceable population consisting of
little  else  beyond  inoffensive   and  de-
fenceless women  and  children?  It  is  a
question  of   simple  charity  and  of the
most elementary humanity."
The charge brought against  the Turks
of   killing   off   Christian   "recruits"   by
toxic  injections  will  only astonish  those
who have forgotten  that  certain  mem-
bers and  agents of  the  Committee  of
Union  and  Progress were convicted  by
the courts-martial held at Constantinople
after the armistice  of  having  systemati-
cally  perpetrated  a  similar  method   of
crime  in  Turkish  hospitals   during   the
war.