6 May 1922: Killing By Turks Has Been Renewed, New York Times 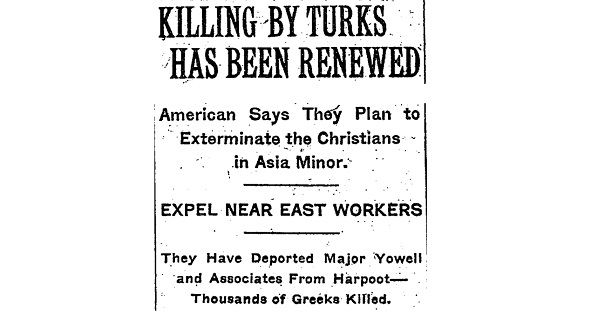 KILLING BY TURKS HAS BEEN RENEWED
American Says They Plan to Exterminate the Christians in Asia Minor.
EXPEL NEAR EAST WORKERS.
They Have Deported Major Yowell and Associates From Harpoot - Thousands of Greeks Killed.

PARIS, May 5. - That  the  Turks   are
planning  fresh   atrocities  against   the
Armenians  and other non-Turkish popu-
lations  of   Asia  Minor  is  charged   by
Major Yowell  of  the  Near   East  Relief,
who has  just  been  violently  deported
without   reason.  Major  Yowell,  whose
home   is   in  Washingtom,  cables  THE
NEW YORK TIMES correspondent that he
and  Dr. Mark  Ward   of New  York and
Dr. Ruth  Parmalee   of   Boston arrived
in Constantinople   yesterday  after hav-
ing been expelled  by  the  Turks   from
Harpoot, where  they were in charge of
the Near East Relief.

"The American  deportartions,"  says
Major  Yowell, "are the  culmination of
a long series of unfriendly acts by  the
Turks, and are the prelude   to   fresh
Turkish outrages against all the remain-
ing   non-Turkish  populations   in Asia
Minor.   Unless   outside   interference
comes soon the final chapter in the his-
tory of Asia Minor minoriites will short-
ly be complete.

"I  have   been  Director of American
relief work in  Harpoot since October. I
was arrested March  5 for reasons which
the Turkish officials  refused to divulge
and forcibly deported  from the country,
preceded by my three  chief assistants,
who  were  informally  notified that un-
less  they left the  country  they would
be forcibly deported.   We were  nearly
two months reaching Constantinople.

"All the twenty American relief work-
ers   in the Harpoot district have been
consistently treated by the Turkish offi-
cials with the utmost discourtesy and in-
justice despite  the fact that they were
doing a large   relief work for   Moslem
orphans and  refugees   as well   as for
Christians.  Our 200-bed  hospital was
operated virtually under the orders of
the Turks.

"The   Armenians in   this district are
now in a state of virtual  slavery.  They
are not permitted to travel even  within
the country and they are absolutely for-
bidden  to leave  the  country.  Since I
have  been in Harpoot I have been com-
pelled   to return $75,000   to people in
America who have forwarded  it to pay
the travelling expenses of  relatives de-
siring to leave the country.

"All the property of the Armenians who
died in the  deportations  has been  con-
fiscated by the Turks.  Armenians   have
no rights in the courts.   A recent  Turk-
ish law prevents   any Armenians   from
inheriting property  except from a father
or brother; all other   properties  go  to
the  Government.  If the rightful   heirs
are deported to   any other  district they
are prevented from taking possession by
the law which forbids them to travel.

"Armenian men   and boys are thrown
into jail without any   reason except to
extort money. Armenian  women today
are being   forced into Moslem   homes
without  the  right  of  appeal  to   any
tribunal. The Turkish officials, who are
six months  behind   in  their   salaries,
state frankly  that  the   only way they
can get   money   is   by   blackmailing
Armenians.

"The condition of the Greek minorities
is   even worse   than  that of the Armeni-
ans.  The sufferings  of the   Greeks  de-
ported  from the districts behind the bat-
tle front   are terrible   and stil l continue.
These deportees began to reach Harpoot
before my arrival in October.   Of 30,000
who left Sivas 5,000 died before reaching
Harpoot.   One  of   the American  relief
workers saw 5,000 bodies on the road to
Harpoot.   Two  thousand  died   on the
roads east of Harpoot.

"The   Near East Relief   has been   gi-
ving aid  to these refugees at stations lo-
cated along the road from Sivas to   Diar-
bekir.   No   American is permitted   east
of Diarbekir.   All along   the route   the
Turks are permitted to visit the  refugee
groups and select women and girls whom
they desire for any purpose.

"The   deportations are still   in   pro-
gress.   If American   aid is   withdrawn,
all will  perish.   Their whole route   to-
day is strewn with the bodies of   dead,
being consumed by dogs, wolves  and
vultures.   The Turks make no   effort
to bury these  dead, and the deportees
are permitted to do so. The chief causes
of death are starvation, dysentery and
typhus.

"The   Turkish   authorities    frankly
state their deliberate intention to exter-
minate the Greeks, and all their actions
support these statements.

"At  the present time   fresh deporta-
tions and outrages are starting  in   all
parts of Asia Minor, from the northern
seaports to the southern districts."

Killing by Turks Has Been renewed, The New York Times, May 6, 1922. Source