In the Traces of the Martyrs 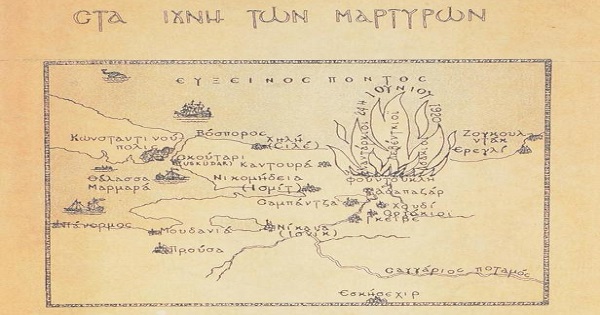 STA IKHNI TON MARTYRON (IN THE TRACES OF THE MARTYRS)
Stavros Rakitzis
Thessaloniki 1984
166 pages, in Greek.

Stavros Rakitzis was born in Findikli (Gr: Foundouklia) which was a group of 3 Greek settlements in the İzmit region of north-western Asia Minor (Turkey). Findikli was situated 16km north of Adapazari and had a population of 3,000 comprising 400 families. The settlements were: Leventkoy, Kantarkoy and Asakoy.

The massacre of the Greeks of Findikli occurred in June of 1920 and was part of a broader series of massacres perpetrated by Kemalist forces in the İzmit region between 1920-1921. According to the British Foreign Office based in Constantinople, the men of Findilki were shot after being locked up in a church, while women were exiled and killed. The Foreign Office reported that 400 men and 30 women were massacred. Rakitzis collated 17 testimonies from survivors of the massacres. An excerpt from the testimony of one survivor appears below.

When they finished with this (taking all our money and jewelry) they started assembling the men in the church of the Virgin Mary and the women and children at the school. After all the jewelry was gathered, Kantercius (the leader of the çetes) told my father not to worry. "I will save you all. I want you also to go and tell all the men to gather at the church so that we can talk to them".
My father thought that they would be safe and that nobody would be hurt, so he went home and told my brother Dimitri to come down from the ceiling where he was hiding with his wife.
My brother had just been married 8 days ago and they only found out in the morning that the village had been surrounded by çetes, so he and his wife both hid in the ceiling of their home. That's why I lost both my brother and my father.
When the çetes finally left from our region, and we went back to our village, we didn't see a village. All we saw was flattened earth and ashes, of houses and of human bodies that had met with pain and horror. Somewhere among all this we found a piece of my brother's shirt clinging to some ashes. It showed that those ashes were those of my brother. We gathered them and buried them. We couldn't find any trace of my father.
Those who were lucky to escape told us later that they tied the men up with ropes in 2's or 3's and forced them into their homes then began shooting them and setting their homes on fire thus burning them while they were still inside half-dead.
The Priest of our village, Father Constantinos, they singled out for specific treatment. They hung him inside the church of the Virgin Mary. He was my uncle.