Inside Constantinople during the Dardanelles Expedition 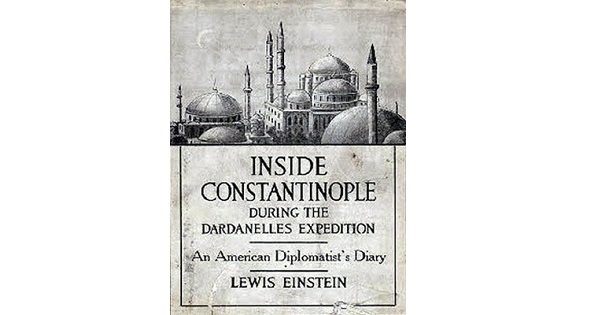 Lewis David Einstein (1877-1967) was an American diplomat and author. He was originally posted to Constantinople from 1906-1909 under the Abdul Hamid reign and the period of the Turkish Revolution, first as Secretary and later as Charge d'Affaires at the American Embassy. He left Constantinople in 1909. He was sent back to Constantinople early in 1915 by the Secretary of State as Special Agent. He remained there until September of 1915. He kept a diary from April through to September 1915, jotting down each day's occurrences.

The persecutions of the Greeks are assuming unexpected proportions. Only a fortnight ago they were reassured and told that the measures taken against the Greek villages in Marmora were temporary and not comparable with those against the Armenians. Now it looks as if there is equality in suffering and that the intention existed to uproot and destroy both peaceful communities. The poor Greeks are obliged to leave their homes often without any notice, compelled to march night and day without food or water, and when they cry for this the Turkish guards point to the mosque and tell them the high road to comforts lies in Islam. Their cattle are requisitioned and they are obliged to nourish them when they themselves starve. (Lewis Einstein. 28th of July 1915. 'Inside Constantinople: A diplomatist’s diary during the Dardanelles Expedition, April-September 1915', p 202).