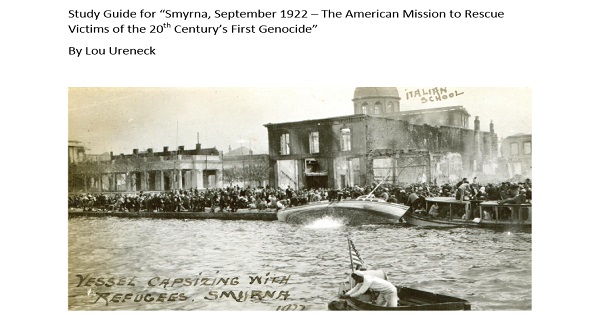 The following study guide on the 20th century's first genocide is an ideal resource for educators.

The final phase of the Greek Genocide occurred with the wholesale massacre of Greeks and Armenians at Smyrna (today Izmir) in September of 1922. At the time, the events were referred to as a holocaust and resulted in a massive relief effort to save over a million survivors from Smyrna and other parts of Ottoman Turkey. The guide was created by Lou Ureneck, author of The Great Fire. One Man's Mission to Rescue Victims of the 20th Century's First Genocide.

Ureneck's book is considered the most comprehensive analysis of the events at Smyrna to date. The guide is also being distributed by Harper Collins, the publisher of the book. The author has kindly made it available to the public through our website. The book is now in its 2nd release with the title: Smyrna, September 1922: The American Mission to Rescue Victims of the 20th Century's First Genocide.

Lou Ureneck is an award winning author, teacher and formerly a newspaper editor.