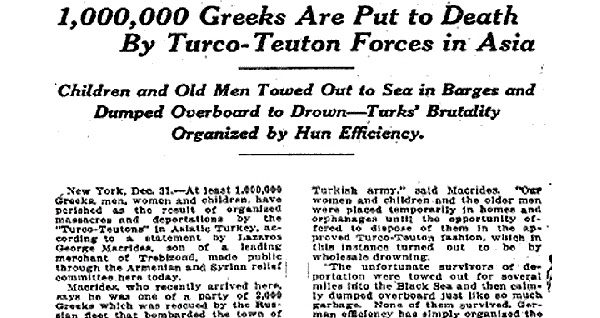 Children and Old Men Towed Out to Sea in barges and
Dumped Overboard to Drown - Turks' Brutality
Organized by Hun Efficiency.

Macrides,   who   recently  arrived  here,
says   he   was  one of a party of  2,000
Greeks  which  was rescued by the Rus-
sian  fleet  that bombarded  the town of
Ordou   late  last   August  and took the
refugees   aboard.  He  had  been taken
to Ordou, he said, when the  Turks raid-
ed  Trebizond  and  seized  his  father's
store along with those  of  other  Greek
merchants.

"The   unfortunate   survivors   of    de-
portations  were  towed out for several
miles into the Black Sea and then calm-
ly dumped overboard just like so  much
garbage.  None  of them survived. Ger-
man efficiency has simply organised the
natural brutality of  the Turk and  made
it many times more  effective  than ever
before. I should think  that  at the most
conservative estimate at least 1,000,000
of my fellow countrymen have perished
miserably through the organised cruelty
of   this  Turco-Teutonic  alliance.   The
only hope of the future lies in America."