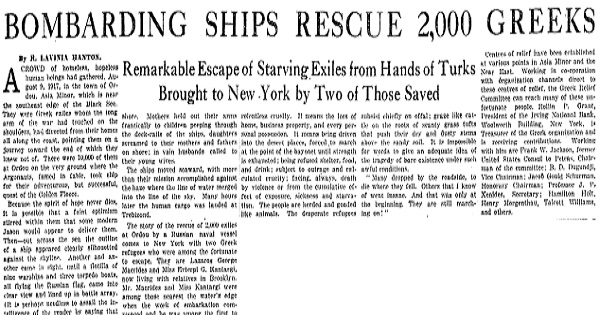 BOMBARDING SHIPS RESCUE 2,000 GREEKS
REMARKABLE ESCAPE OF STARVING EXILES FROM HANDS OF TURKS BROUGHT TO
NEW YORK BY TWO OF THOSE SAVED

A crowd of homeless, hopeless
human  beings  had gathered, Au-
gust 9, 1917, in  the  town  of  Or-
dou, Asia Minor,   which   is   near
the southeast edge of the Black Sea.
They were Greek exiles whom the long
arm of the war had touched on the
shoulders, had directed from their homes
all along the coast, pointing them on a
journey toward the end of which they
knew not of. There were 10,000 of them
at Ordou on the very ground where the
Argonauts, famed in fable, took ship
for their adventurous, but successful,
quest of the Golden Fleece.

The story of the rescue of 2,000 exiles
at   Ordou by   a  Russian naval vessel
comes to New York   with two Greek
refugees who were among the fortunate
to escape. They are Lazaros George
Macrides and Miss Evterpi G Kantargi,
now living with relatives in Brooklyn.
Mr. Macrides and Miss Kantargi were
among those nearest the water's edge
when the work of embarkation com-
menced and he was among the first to
be taken abroad. On the confusion he
became separated from his companion
and when he got to the deck began a
search for her. Failing to find her any-
where on the ship, he scanned the faces
of the people on the shore. At last he
glimpsed her struggling in the water
where she had been thrown from the
small boat taking her to the ship.
Macrides jumped overboard and swam
to the rescue of the girl, who was nearly
drowned when he reached and rescued her.

This romantic bit - the fortunate end-
ing of the adventure of these young pe-
ople - is only a shining thread in the
tragic story of the Greek exiles now be-
ing driven into Asia Minor.

At the outbreak of the great war there
was estimated to be about five million
Greek Christians in Turkey, all subject
to Turkish rule. According to the latest,
and most trustworthy, information some
seven or eight hundred thousand have
been deported, and the remainder are liv-
ing under the constant dread of being
summoned any day to the road and the
march. The region from which they
have been gathered, and sent to the in-
terior, is bounded by the Black Sea on
the north, the coast lines of the Aegean,
the Marmora and Mediterranean Seas on
the west, the coastline of the Mediter-
ranean Sea on the south, and an imag-
inary line from Alexandretta to Trebi-
zond on the east.

On Saturday, July 20, 1917, the follow-
ing orders came from the Army Head-
quarters at Sheishehie (Endered):
"By July 25 let no Greek man over
16 and under 50 be found in Ordou.
Send all such on into the interior. As
for the families, we will send further
orders later."

It was little more than two weeks
later that 2,000 people of Ordou were
rescued by the Russian ships. those
who were left fell under the fatal order.
the reason Mr. Macrides had been
spared deportation was because he hap-
pened to be in the employ of a military
official of Ordou. In this way he was
in Ordou the day of the naval bom-
bardment. He is now doing what he
can to assist the Relief Committee for
Greeks in Asia Minor, with headquar-
ters at 1 Madison Avenue, New york.
he says:

"Deportation  in  Asia  Minor is a
euphemism for the most heartless and
relentless cruelty. It means the loss of
home, business property, and every per-
sonal possession. It means being driven
into the desert places, forced to march
at the point of the bayonet until strength
is exhausted; being refused shelter, food,
and drink; subject to outrage and cal-
culated cruelty; facing, always, death
by violence or from the cumulative ef-
fect of exposure, sickness and starva-
tion. The people are herded and goaded
like animals. The desperate refugees
subsist chiefly on offal; graze like cat-
tle on the roots of scanty grass tufts
that push their dry and dusty stems
above the sandy soil. It is impossible
for words to give an adequate idea of
the tragedy of bare existence under such
awful conditions.

"Many dropped by the roadside to,
die where they fell. Others that I know
of went insane. And that was only at
the beginning. they are still march-
on!"

Centres of relief have been established
at various points in Asia Minor and the
Near East. Working in co-operation
with organization channels direct to
these centres of relief, the Greek Relief
Committee can reach many of these un-
fortunate people. Rollin P. Grant,
President of the Irving National Bank,
Woolworth Building, New York, is
Treaurer of the Greek organization and
is receiving contributions. Working
with him are Frank W. Jackson, former
United States Consul to Patras, Chair-
man of the committee; B. D. Dugandji,
Vice Chairman; Professor J. P.
Xenides, Secretary; Hamilton Holt,
Henry Morgenthau, Talcott Williams,
and others.