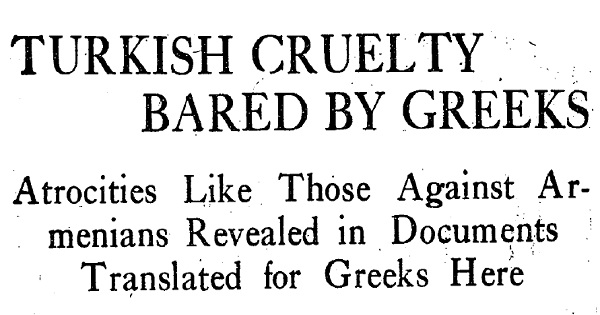 The Turkish campaign of atroci-
ties against the Armenians, it is
now becoming known, was coin-
cident with a similar program
against the millions of Greeks inhabiting
Thrace, the districts around the Bos-
porus, the Dardanelles, and the Sea of
Marmora, the southern coast of the
Black Sea, and the eastern shores of the
Aegean.

According to estimates made by the
Greek Ministry of Foreign Affairs, fully
1,500,000 Greeks of the Turkish Empire
have been deported from their homes,
usually under conditions which made
probable death from starvation, disease,
or exposure. Hundreds of thousands
have died thus or have been massacred
by Turkish soldiery; unspeakable
atrocities have been a regular
accompaniment of massacres and
deportations, and the commercial,
religious, and civic life of the
Greek communities has been destroyed.