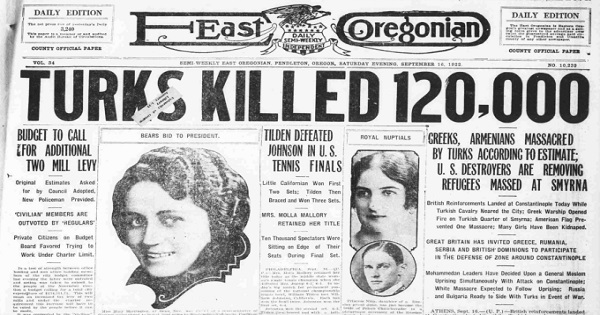 GREEKS, ARMENIANS MASSACRED
BY TURKS ACCORDING TO ESTIMATE;
U.S. DESTROYERS ARE REMOVING
REFUGEES MASSED AT SMYRNA.

Great Britain Has Invited Greece, Rumania,
Serbia and British Dominions to Participate in
the Defense of Zone Around Constantinople.

Mohammedan Leaders Have Decided Upon a General Moslem
Uprising Simultaneously with Attack on Constantinople;
White Massacre Expected to Follow Uprising; Russia
and Bulgaria Ready to Side with Turks in Event of War.

Unconfirmed estimates from Armenian sources say that seventy thousand
Christians were massacred in Smyrna and fifty thousand elsewhere in the path
of the Turkish armies. Refugees along Smyrna Bay are estimated at half a
million.

Girls Kidnapped
Smyrna,  Sept. 16,  -  (U.P) -  Twen-
ty-five  hundred  dead bodies litter the
streets,  while   the harbor  waters are
dotted  with  floating  corpses  as a re-
sult   of  the   massacre  and  fire. Girls
from twelve  to eighteen were kidnap-
ped. Aged men and women were shot
down  as they  fled  from  the  fire. Six
thousand Greeks  are  reported burned
alive.