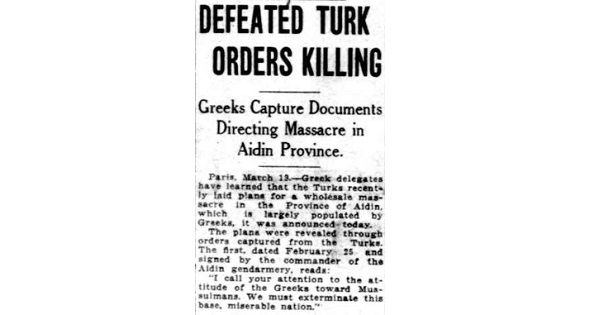 Allies Take Precautions.
The order declares that money and
arms  have  been distributed  among
well-known comitadjis for this purpose.
More is  promised if the plans are car-
ried  out successfully. The order con-
cludes  with the  instruction  to  "act
freely with women, regardless of their
honour."
A second order said:
"The Greeks may be expected to ex-
press   openly   their  sentiments   for
Greece.  Immediately   each  citizen is
expected to do  his duty and join in a
general   massacre.  Each  should   kill
four or  five Greeks.  Oral  instructions
will be given as to the methods of exe-
cuting this order."
As soon  as  the orders were seized
allied  representatives  took necessary
precautions.