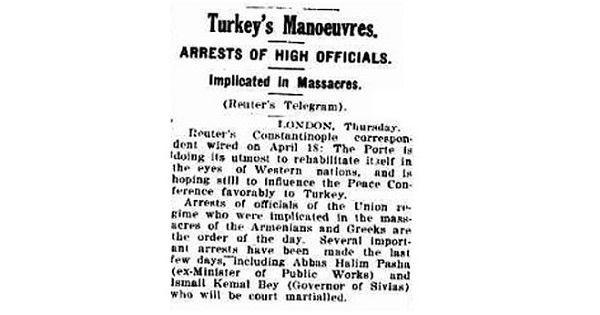 LONDON, Thursday.
Reuter's  Constantinople  correspon-
dent wired on  April 18:   The  Porte is
doing its utmost to rehabilitate itself in
the eyes of the Western nations, and is
hoping still to influence the Peace Con-
ference favorably to Turkey.
Arrests of officials of the Union re-
gime who were implicated in the mass-
acres of the Armenians and Greeks are
the order of the  day.  Several  import-
ant arrests  have  been made the  last
few days, including Abbas Halim Pasha
(ex-Minister  of   Public  Works)  and
Ismail Kemal Bey (Governor of Sivias)
who will be court martialled.