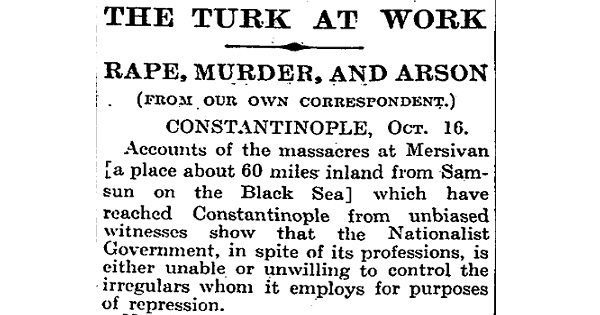 THE TURK AT WORK
RAPE, MURDER, AND ARSON.

(FROM OUR CORRESPONDENT.)
CONSTANTINOPLE, OCT. 16.

Accounts of the massacres at Mersivan
[a place about 60 miles inland from Sam-
sun on the Black Sea] which have
reached Constantinople from unbiased
witnesses show that the Nationalist
Government, in spite of its professions, is
either unable or unwilling to control the
irregulars whom it employes for purposes
of repression.
No Greek rising, still less any move-
ment on the part of the Armenians, had
taken place at Mersivan before the mas-
sacres, and none was apprehended. Cer-
tain Greek teachers at the American Col-
lege at Mersivan had been arrested some
months previously on charges of being
connected with the Pontus movement and
the college closed. Several Americans,
however, remained there and engaged in
relief work on behalf of the American
Committee for Relief in the Near East.
In the last week in July the local
Governor received a message from the
notorious Osman Aga announcing his in-
tention of visiting the town with his irre-
gulars. He replied expressing the hope
that there would be nno incidents and then
shut himself up. The irregulars arrived
and proceeded at once to indulge in
murder, rape, and robbery at the expense
of the Greek and Armenian elements.
Most of the Christians who were unable
to escape to the American compound were
confined in three houses - the French
school, the police barracks, and the "Red
House." In the latter were a number of
women.
The irregulars broke into the Red House
and violated most of the women there after
robbing them. The French School was set
on fire by the irregulars, but those within were
saved by some of the better-class inhabitants.
Of those in the barracks many were killed. A
home for widows, founded by the Ameri-
cans, was attacked. Some of the women
therein were killed, others carried off by the
irregulars.
About 500 women and children were
deported to villages some 15 miles from Mer-
sivan. Of the grown men in the town a large
proportion were killed, the irregulars taking
special pains to discover Armenians who had
been converted to Islam in 1915-1916, but had
been encouraged to revert to Christianity
when a British post was stationed at
Mersivan.
After staying four days in the town the
irregulars departed. The gendarmes and some
armed peasants continued to loot and other-
wise misbehave for three or four days more.
The dead, about 1,200 in number out of a
Christian population of 2,000, were buried
near the American compound, and at least
two persons who were still moving were seen
among those thrown into a trench and covered
with earth.
Two rich Armenians, to whom Sadik, the
Nationalist Commissioner for the district,
owed £T6,000, had taken refuge in the Ameri-
can building. Sadik ordered them to be pro-
doced, and had them both killed, but was
unable to lay his hands on the papers proving
the debt, which are now in Constantinople.
The Nationalist Government ordered an
inquiry into the massacre, but no word has
reached Constantinople as to the punishment
of Osman Aga and his creatures who were
responsible.
It is a singular commentary on the claims
of the Turkish "educated" class to some
measure of civilization that Osman Aga,
who was formerly a pirate in a small way
and is simply an illiterate ruffian whom the
Kemalist Government has put into a colonel's
uniform, should be described as a hero and
patriot by the Press both of Constantinople
and of Angora.