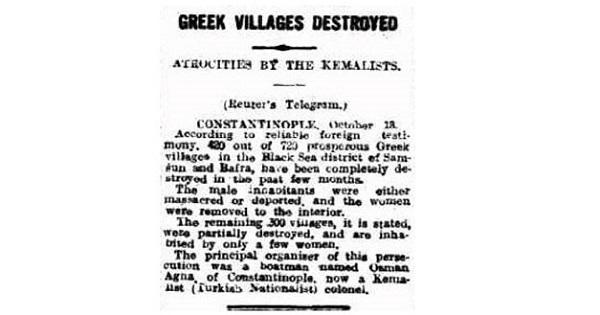 (Reuter's Telegram)
CONSTANTINOPLE, October 18.
According  to   reliable   foreign   testi-
mony, 420 out of  720 prosperous Greek
villages  in  the  Black Sea district of Sam-
sun and Bafra, have been completely de-
stroyed in the past few months.
The  male   inhabitants   were   either
massacred or deported, and the women
were removed to the interior.
The remaining 300 villages, it is stated,
were  partially  destroyed,  and are inha-
bited by only a few women.
The  principal  organiser  of  this perse-
cution  was  a  boatman  named  Osman Agha
Osman Agha,  of  Constantinople, now  a Kema-
list (Turkish Nationalist) colonel.