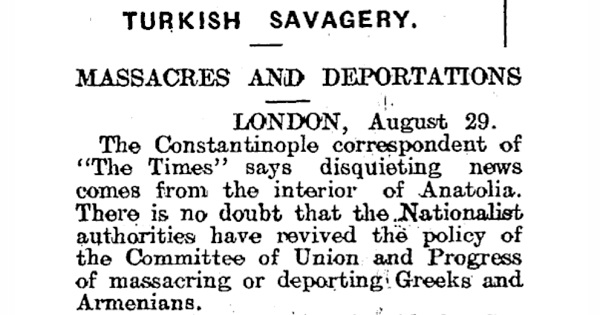 LONDON, August 29.
The Constantinople correspondent of
"the Times"   says   disquieting   news
comes  from  the  interior  of  Anatolia.
There is no doubt that the Nationalist
authorities  have revived the policy of
the Committee  of Union and Progress
of massacring or deporting Greeks and
Armenians.
Many Greeks from  the  Black  Sea
littoral have been killed, and  one  con-
voy  of  deportees  which  started 900
strong,  has  reached Sivas  with only
200 left.   Some  5000  Turkish Arme-
nians, including  women and children,
have been deported.  Many were mas-
sacred or died on the  march.
The Nationalists care little for Eur-
opean or American opinion, but they
profess to respect the opinion of Mos-
lems  in  India.   The   correspondent
writes:  "Is it  too  much  to  ask  the
responsible leaders of Indian Moslems
to use their  influence  at  Angora  to
prevent a repetion of  the  horrors of
1915 and 1916.   No  prominent  In-
dian's voice has yet denounced  the
Turkish tyranny over Christians."