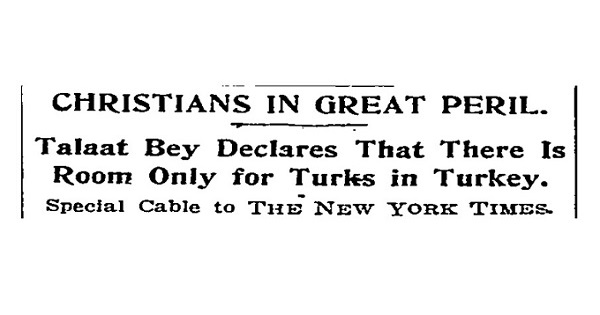 CHRISTIANS IN GREAT PERIL
Talaat Bey Declares That There Is
Room Only for Turks n Turkey.

ATHENS. Jan, 12,  (Dispatch  to  The
London Morning Post.) - It  is asserted
in well-informed circles that the Turks
for the present have abandoned their
advance against Egypt.
In Constnatinople anxiety regarding
the possible forcing of the Dardanelles
continues.
It  is evident  that  the  situation  for
Christians is extremely precarious even
in the large cities, and  Talaat Bey, the
Minister of  the  Interior, has stated to
the Councillor of the Greek Patriarchate
that in Turkey henceforth there will be
room only  for  Turks.   While  he  was
profuse in assurances to the Greek Min-
inster regarding  the  cessation of anti-
Greek persecutions, no  real  ameiiora-
tion of the situation is perceptible.
The  Turks  are  again  fortifying the
Tchatalja lines.