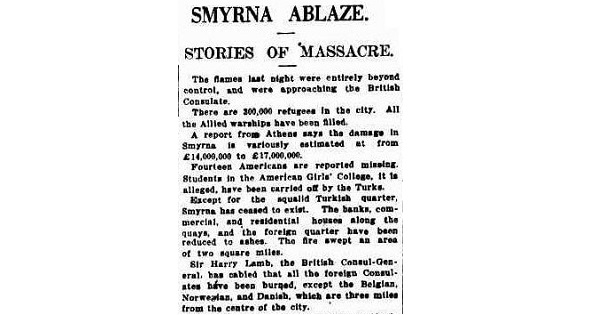 The flames last night were entirely beyond
control, and were approaching the British
Consulate.
There are 300,000 refugees in the city. All
the Allied warships have been filled.
A report from Athens says the damage in
Smyrna is variously estimated at from
£14,000,000 to £17,000,000.
Fourteen Americans are reported missing.
Students in the American Girls' College, it is
alleged, have been carried off by the Turks.
Except for the squalid Turkish quarter,
Smyrna ceased to exist. The banks, com-
mercial, and residential houses along the
quays, and the foreign quarter have been
reduced to ashes. The fire swept an area
of two square miles.
Sir Harry Lamb, the British Consul-Gen-
eral, has cabled that all the foreign Consul-
ates have been burned, except the Belgium,
Norwegian, and Danish, which are three miles
from the centre of the city.
The sworn testimony of American residents
shows that Turkish regular soldiers syste-
matically applied torches, apparently in repri-
sals for the devastation carried out by the
Greeks during their retreat, also that the
Turks intended the fire should conceal the
massacres which marked their entry into the
city.
American witnesses estimate that at least
1000 people were massacred previous to and
during the fire; also, that a large number
perished in the flames.
The Greek Government has protested to
the League, the Allies, and the United States
that the Kemalists have massacred refugees.
It states that many Greeks and and Armenians
were summarily shot on a charge of having
helped the Greek army, or having committed
imaginary crimes. An American states that
he saw the headless bodies of Greek soldiers
tied together.
The Foreign Office states that, according to
the latest telegrams from Smyrna, there is
nothing to indicate any British fatalities
there. All the consulates except the Belgian,
Norwegian, and Spanish have been destroyed.