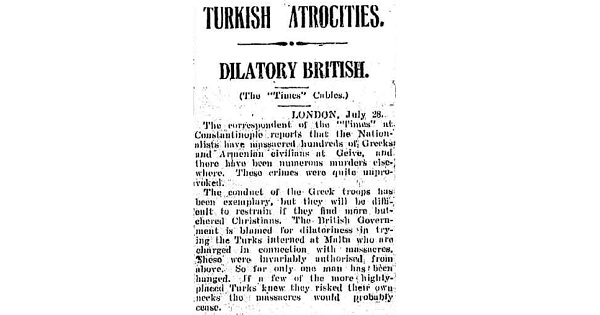 (The "Times" Cables)
LONDON, July 28.
The correspondent  of  the  "Times"  at
Constantinople  reports that  the  Nation-
alists have massacred hundreds of Greeks
and   Armenian  civilians  at   Geive,  and
there  have been  numerous murders else-
where.  These  crimes  were  quite  unpro-
voked.
The conduct of  the  Greek  troops  has
been  exemplary,  but  they  wil l be   diff-
icult  to  restrain  if  they  find  more  but-
chered  Christians.   The  British   Govern-
ment  is  blamed  for  dilatoriness  in  try-
ing the Turks interned  at  Malta who are
charged  in  connection  with  massacres.
These  were  invariably  authorised  from
above.   So  far  only  one man has been
hanged. If a few more of the more highly
placed  Turks  know they risked their own
necks   the  massacres   would   probably
cease.