In 2013, Greek historian Vlassis Agtzidis uncovered two news reports from 1924 which describe how the administration of Mustafa Kemal Atatürk sent 400 tonnes of human remains (approximately 50,000 human bodies) to the port of Marseilles aboard a British-flagged ship. The reports appeared in The New York Times and the French newspaper Midi. The New York Times reported that the human remains originated from the port of Mudanya on the Sea of Marmara in Turkey. Agtzidis argues that the remains may have been destined for industrial use.

The practice of turning human bones into fertilizer was not an uncommon one in the early part of the 19th century. In fact, it occurred following the battle of Waterloo (1815). On August 5, 2014, Robert Fisk wrote:

After Waterloo, the bones of the dead – Wellington’s Britons and Napoleon’s French and Blücher’s Prussians – were freighted back to Hull to use as fertilizer for England’s green and pleasant land, military mulch from the 1815 battlefields which also yielded fresh teeth to be reused as dentures for the living.

Research by Joe Turner in March 2015 based on archival news reports also reveals evidence that an international bone trade existed in the 19th century.

According to Agtzidis, France was pro-Turkish during the period in question so it wouldn't have been an ethical issue for the French to purchase the bones of dead Greeks and Armenians for industrial use. The New York Times article of December 23, 1924 wrote:

Marseilles is excited by a weird story of the arrival in that port of a ship flying the British flag and named the Zan carrying a mysterious cargo of 400 tons of human bones consigned to manufacturers there. The bones are said to have been loaded at Mudania on the Sea of Marmora and to be the remains of the victims of massacres in Asia Minor. In view of the rumors circulating it is expected that an inquiry will be instigated.

The French newspaper Midi published a story under the title Cargaison funèbre (A Mournful Load) and stated: 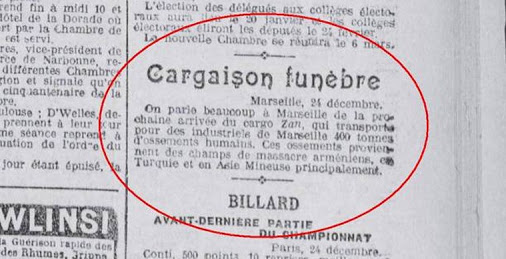 According to Agtzidis, the Greek newspaper Macedonia reported that the Zan arrived at the port of Thessaloniki, Greece on the 13th of December 1922, however the contents of the cargo weren't mentioned. Thessaloniki at the time was overflowing with genocide survivors, so it's possible authorities chose to keep the cargo's contents a secret so as not to aggrieve the survivors of the genocide. Despite this, workers at the Thessaloniki port were aware of the cargo. In his book titled Chronicles of the Great Tragedy, Christos Angelomatis states that workers at the port reacted to the cargo’s contents, but Greek authorities weren't allowed to take action due to British intervention. Angelomatis wrote:

Athenian newspapers published the news as follows: 'The docking into the port of Thessaloniki of the English ship Zan from Mudania has transferred four hundred tons of dead Greek bodies. The workers at the port who made the revelation prevented the ship from sailing away, but the British consul intervened and the ship was allowed to sail on. 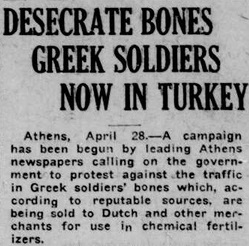 These were't the only news reports about a bone trade. A news report from April 1924 indicated that bones from Greek soldiers and civilians were sent to Holland for use in chemical fertilizers. The piece in the Brandon Daily Sun on April 28, 1924 stated:

The accusations seem to be founded on facts, as the newspapers print full details of the sale of Greek bones in large lots by the Turkish authorities in Anatolia, to Dutch merchant ships. The steamer Venus, registered as from Amsterdam, is now carrying 1,000 sacks of the bones of Greek soldiers and civilians from Anatolia to Holland.

The Greek soldiers and civilians exterminated by the Turks in their victorious march to Constantinople a year ago last autumn numbered more than 100,000, according to reliable estimates. It has been estimated that one-third of these already have been commercialized by the local Turkish authorities charged with the reconstruction of Anatolia.

The presence of a large number of human corpses in Asia Minor was witnessed by Elias Venezis. In September 1922 at the age of 18, Venezis was arrested, taken prisoner and enslaved in a labor battalion. Of the 3,000 conscripted into his labor brigade only 23 survived. Venezis later penned his memoire describing his experience. In chapter 18 of his memoire, Venezis recounted how a group of prisoners were taken to a ravine just out of Magnesia (today Manisa) and were ordered to hide the remains of tens of thousands of Christians who had been slaughtered. Venezis wrote:

One morning they took about 60 prisoners out to do a job at a place just outside of Magnesia (today Manisa). Opposite the railroad tracks near Sipilos is the end point of a large ravine. They call it Kirtik-Dere. Inside this ravine it was estimated that they'd killed about forty thousand Christians from Smyrna (Izmir) and Magnesia during the early days of the Smyrna Holocaust; males and females. The bodies had melted over winter and the water of the gorge which descended from above pushed the corpses further down. Our job all day was to push the corpses back in so that they couldn't be seen.

Further reading:
The Number 31328: The Book of Slavery
The Treatment of the Greek Prisoners in Turkey: Report of the International Commission of Inquiry appointed at the Request of the Greek Red Cross.
Turks Killed 120,000