The Genocide of the Greeks in Turkey 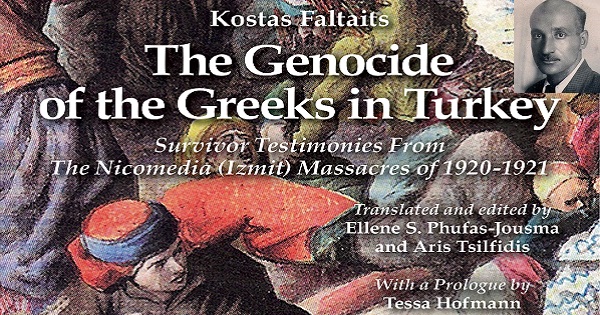 Availability:
US residents: Amazon
All other destinations: eBay

The Izmit Massacres were a series of massacres perpetrated by Kemalist forces on Greek communities in the region east of Istanbul historically known as Bithynia between 1920-1921. According to one report, at least 32 Greek villages were looted or burned and more than 12,000 Greeks were massacred.

In March of 1921, journalist Kostas Faltaits arrived in Asia Minor (today’s Turkey) sent by newspaper Embros to cover Greece’s movements in the Greco-Turkish War. By the time he arrived in the region of Nicomedia (today’s İzmit) - a region inhabited by a large number of Greek, Armenian and Circassian communities - Kemalist forces had already set fire to many of the surrounding towns and villages, leaving behind a trail of death and destruction. Faltaits came face to face with the fleeing survivors of these massacres, and was able to collect these valuable and graphic eye-witness testimonies which were published in both Greek and French at the time. Their stories include the mass burning of civilians in their churches and homes, rape and sexual torture of women, and the burning of children alive.  The book also includes the observations of the Armenian Metropolitan of Nicomedia, Stephan Hovakimian.

Translated for the very first time in English and with a prologue by Tessa Hofmann, this edition puts into perspective the claims of mutual atrocities which both Greeks and Turks were accused of in this region. The events described in the book will shed some light into just one of the many chapters of the Greek Genocide, a genocide which claimed the life of approximately one million Greeks living in the former Ottoman Empire.

The current English translation of testimonies collected by Kostas Faltaits represents [...] an excellent initiative which deserves to be extended to the methodic examination of the three main phases of the extermination of the Greeks of Asia Minor.  Prof. Raymond Kévorkian, historian.

It is a book that will benefit all those who are interested in the fate of the Christians during the collapse of the Ottoman Empire and can also be very helpful to younger generations who are studying those events in high school or in colleges and universities. - Alexander Kitroeff, Professor of History.

..this  new  publication  in  English  stands  as  a  small but important victory for those who study genocides in the sad and ever-present need to understand and try to prevent them. Faltaits’s witness reports of the Nicomedia (Izmit) massacres will now hold up much longer against what Lincoln called 'the silent artillery of time.'  Michael Kalafatas.

The accounts by Greek survivors in The Genocide of the Greeks in Turkey, of massacres, torture, rape, theft, and the destruction of villages, and the brutalizers' sheer pleasure in inflicting such suffering on fellow humans, attests to the depths to which humans are capable of descending.  Thea Halo, author of Not Even My Name.

This is an important document about the Greek Genocide and deserves to be placed alongside other works of the 1920's such as the Black Book of the Ecumenical Patriarchate, George Horton's the Blight of Asia, and Edward Hale Bierstadt's the Great Betrayal.  Theodore Karakostas, activist, author, writer.

With moving testimonies contextualized with scholarly and journalistic commentary, this book improves immeasurably our understanding of the Anatolian Greek genocide by Kemalist militants. The book helps to correct the omission of the Greek experience from the Armenian genocide literature.   Hannibal Travis, Professor of Law.

Kosta Faltaits’s book based on the evidence of the survivors’ accounts brilliantly exposes the policy of the Kemalists to exterminate the Greek population of Nicomedia. The author using remarkable first-person accounts presents the chilling history of how the Turks tried by all means to eliminate one more Christian community of their country.  Anahit Khosroeva, Ph.D.

As any researcher will tell you, primary source material is an invaluable resource. A first-hand account of any event provides direct context, placing the reader right into the time and place of the event in a way that a secondary source, such as a history book or article, cannot. To have primary source material written by a journalist, a person who writes well and is trained to observe, is priceless. ‘The Genocide of the Greeks in Turkey’, is such a document.   Hariklia Heristanidis, author. 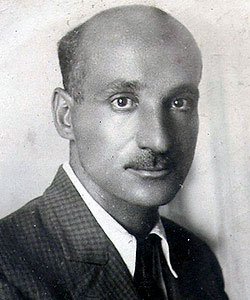 Kostas Faltaits (1891-1944) was a renowned Greek journalist and author. He worked for a number of major Athenian newspapers. He was born in Smyrna (today Izmir) in 1891 but in the same year his family moved to the island of Skyros. He studied Law and Philology at the University of Athens but in 1910 began his career in journalism. More about the author.

The book was originally published in Greek in 1921 under the title These are the Turks: Survivor Testimonies from the Nicomedia Massacres  (Αυτοί είναι οι Τούρκοι: Aφηγήματα των Σφαγών της Νικομήδειας). It was published in French in 1922 & 1923 under the title Voila les Turcs! : recits des massacres d'Ismidt.