The Genocide of the Ottoman Greeks 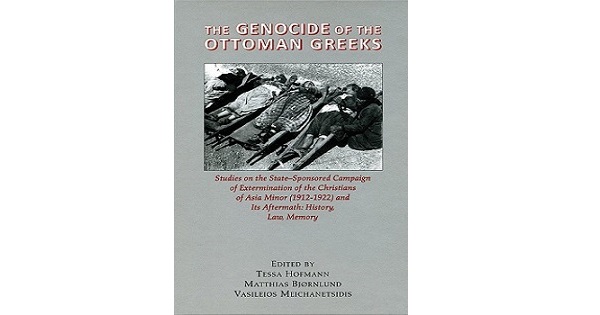 THE GENOCIDE OF THE OTTOMAN GREEKS
Studies on the State-Sponsored Campaign of Extermination of the Christians of Asia Minor (1912-1922) and Its Aftermath: History, Law, Memory.

The period of transition from the collapse of the Ottoman Empire to the foundation of the Turkish Republic was characterized by a number of processes largely guided by a narrow elite that aimed to construct a modern, national state. One of these processes was the deliberate and planned elimination, indeed extermination, of the Christian (and certain other) minorities.

The last two decades have seen a massive amount of research of the genocide of the Armenian population in the Ottoman/Turkish space; our publishing house has produced a number of works, most notable of which was the eyewitness testimony of the Leslie A. Davis, US Consul in Harput (The Slaughterhouse Province: An American Diplomat's Report on the Armenian Genocide of 1915-1917). Much less scholarly work has been done on the genocide of the Greeks of Asia Minor and Thrace; there are many reasons for this, including the fact that Turkish governments have been successful in intimidating diplomats in the context of Turkish-Greek relations of the last generation, and of subverting academic integrity (inducing some scholars to make a career as denialists supported by international NGOs, in the name of countering nationalism).

Raphael Lemkin, the legal scholar who introduced the term 'genocide' into international law, formulated his early ideas on the definition of this war crime by studying the destruction of the Christians of Asia Minor, while the distinguished Turcologist (and recently deceased) Neoklis Sarris has noted that the annihilation of the Christian minorities represented an integral element in the formation of the Turkish Republic. As the editors of this volume note the recent resolution by the International Association of Genocide Scholars recognizing the Greek and Syriac genocides suggests a wider range of victim groups. This volume therefore represents an effort to provide an outline and a direction of a more extensive study of the deliberate destruction and elimination of a Greek presence that spanned over three millennia, in the space that became the Turkish Republic.

The editors of this volume (themselves distinguished genocide scholars) have included article contributions on a number of areas and collaborated with distinguished scholars from Europe, the United States and Israel; they have have divided these contributions into three areas: Historical Overview, Documentation, Interpretation; Representations and Law; Genocide Education; Memorialization; Conceptualization; as well as a very extensive Bibliography.

Publisher's Note
The Editors
A Note on Transliteration
Introduction: T. Hofmann, M. Bjornlund, Vassileios Meichanetsidis.
The integrity and courage to recognize all the victims of a genocide. Israel Charny.

Historical overview, documentation, interpretation.
Γενοκτονία εν Ροή: Cumulative genocide. The massacres and deportations of the Greek population of the Ottoman Empire (1912-1923). T. Hofmann.
The 1914 persecutions of the Greeks in the Ottoman Empire and the first attempt at an exchange of minorities. J. Mourelos
Danish sources on the destruction of the Ottoman Greeks, 1914-1916. M Bjornlund.
The role of Teşkilât-ı Mahsusa (Special Organization) in the genocide of 1915. R Donef.
The Smyrna Holocaust: The final phase of the Greek Genocide. N. Hlamides.
The immediate context of the Smyrna catastrophe: The peace treaties and the aftermath of the Greco-Turkish war of 1919-1922. M Stewart.
The American Near East Relief (NER) and the Megale Katastophe in 1922. Harry J. Psomides.
International Red Cross: A mission to nowhere. T. Stavridis

Memorialization
Remembering the genocide and the "unforgattable homelands:" The erection of commemorative monuments in Greece by the refugees of Asia Minor. Michel Bruneau and Kiriakos Papoulidis