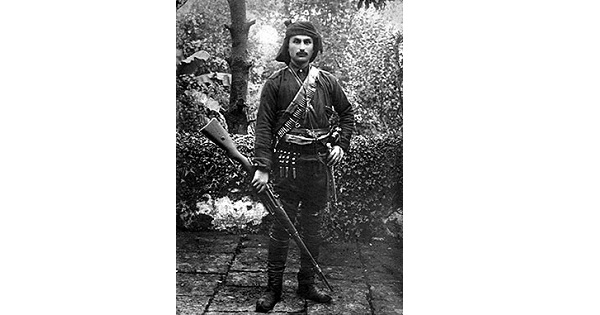 Feridunoğlu Osman Ağa (1883-1923) otherwise known as Topal Osman, was a brigand and Kemalist military commander responsible for the mass murder of a vast number of Greeks during the Greek Genocide. While serving for the Committee of Union and Progress (CUP) in the Balkans as a volunteer, he received an injury to his foot which resulted in him being referred to as Topal Osman (topal meaning lame).1  During World War 1 he rounded up deserters, some of whom he enlisted in his band.

Osman Ağa roamed the Black Sea region with his band of ‘cut-throats’ and was responsible for numerous massacres and deportations of Greeks and Armenians. He had a fanatical loyalty to Mustafa Kemal who awarded him a colonelcy and also served as his bodyguard.2 In 1919, he was appointed mayor of Giresun (Gr: Κερασούντα) as a reward for his murderous deeds. Mustafa Kemal's biographer Andrew Mango refers to Topal Osman as 'a sadistic ethnic cleanser of Armenians and Greeks'.3

The Central Council of Pontus received eye-witness accounts of the following atrocities committed by Osman Ağa and published them in a report dated October 17, 19214:

In July of 1921, after having murdered the greatest part of the notables and robbed them of their fortunes, Osman Ağa deported the male population of Tirebolu (Gr: Tripolis) near Giresun, and Bulancak (Gr: Pulantzaki) to Harput, Mamouret-oul-Azis and Alpistan, while he shared the beautiful women with his fellow partisans. The victims were conveyed into the mountains by the çetes. Women and children who were left unprovided for and completely nude, perished from hunger. Of the 2,500 Greeks in Tirebolu, only 200 women and children remained, and of the 14,000 Greeks of Giresun only 4,000 women and children survived. The Greeks of Fatsa and Ünye were also invaded by Osman Ağa and suffered the same atrocities.

In the little village of Çakallı four hours from Samsun, Osman Ağa ordered the women and children (the men having previously been deported) to be locked up in some houses of the village and there they were burnt alive.

In the village of Kavak he committed the same crimes; only a single old man of 80 was saved.

At Havza he drove together the women and children on the banks of the river, where they were massacred and thrown into the river. All the Greek villages of the district were laid to ashes. Eighteen brides and girls of the above village were picked out by Osman Ağa for their beauty in order to be distributed to his fellow criminals, who after having satisfied their carnal appetites for several days, shut them up in a house and burnt them alive.

At Merzifon, Osman Ağa and his companions, after having completely bereaved all the Christians, put fire to the Greek and Armenian quarters. The scenes which took place in the course of the fire were appalling. All the exits were barricaded and the unfortunate people trying to escape were either mercilessly killed or thrown back into the fire without distinction of whether they were women, children or old men. In the course of 5 hours, 1800 houses along with their inhabitants were burnt down. It was impossible to describe the orgies committed against virgins and children. While they were performing these cruelties, they shouted at their victims; "Where are the English, the Americans and your Christ to save you?"

Other atrocities committed by Osman Ağa

While on his way through the village of Kirli having lodged and fed at the expense of the people there, he demanded the daughter in law of Anastasse Aga, a notable of that village who refused. Osman Ağa then ordered Anastasse Aga to be butchered together with his four children and four other men.5

In June 1920 at the village of Enayet near Giresun, a family of five Greeks were murdered by Osman Ağa and his followers and several women and young girls carried off. Houses were robbed and cattle stolen.6

In July 1920, Osman Ağa massacred 15 Christians in the village of Karali and Kuruk. Because of the violation of a Muslim woman by a man named Panayoti, 50 Greeks of this name were arrested and beaten and two tortured and killed. His followers then extorted large sums from the Christians while he himself threatened to massacre all Christians unless the San Remo decision was modified.7

In July 1920 Osman Ağa arrested and beat the Bishop of Sivas.8

On 20th of August 1920, Osman Ağa continued to extort money from the Christians and many of the richest had been reduced to poverty. On the night of the 13/14th of August, Osman arrested the whole male population of Giresun in order to expel them; his followers subsequently entered and pillaged their houses.9

On the 8th of September 1920, a newspaper report described how Osman Ağa carried out a ghastly series of atrocities in Giresun whereby he shut up all the males, and every evening led out five to be executed. The remaining Christians bought their liberty with a ransom of £300,000.10 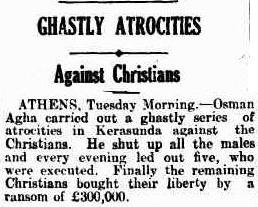 In March 1921, Osman Ağa compelled the inhabitants of the town of Sivas to feed him and his band of 500 men for three weeks. At Ezboter two Greeks and an Armenian were arrested and after having their bare feet shod with horse shoes, they were massacred. He also ordered the massacres of women and children of the villages of Kul-Hisar, Mesudiye and Kirik.11

In 1921, on passing through Amasya and Çorum, Osman Ağa instructed his men to massacre every Christian man or woman whom they encountered.12

A report on the 9th of July 1921, described horrible details of the persecution of Christians when Osman Ağa arrived there on the second day of Bayram (a Turkish religious holiday) and murdered 10 Greeks, then surrounded the stores of the American Tobacco Company and arrested all the Greek clerks numbering some 800 and had them transported to an unknown destination. The Greek quarter was then surrounded and 1,500 other Greeks were arrested and deported to the interior.13

On the 20th of December 1921, a band of 100 Turco-lazes from Rize enlisted by the Mayor of Giresun Osman Ağa, landed at Ordu and were received by the authorities of the town. The following day they surrounded the streets and proceeded to pillage the shops of Christians taking with them two Greeks. The merchant Michel Macrides of Giresun was decapitated in a small boat by order of Osman Ağa and his body thrown into the sea. Several other notables were also deported causing a severe sense of terror among the other Christians.14

On the 25th of February 1922, 20 Greek villages were destroyed by fire in the region of Giresun by the order of Osman Ağa, Major of Giresun and Kemalist military commander, and on the 1st of March the villages of Beislan, Pozat, Topekeny and Kiavourhiki were also burned down, the inhabitants consisting only of women and children who were previously imprisoned in the houses, having completely perished in the flames.15

On the 23rd of March 1923, Osman Ağa strangled Trabzon Deputy Ali Sukru Bey to death because the Deputy criticized Mustafa Kemal. Osman Ağa was shot dead in Ankara on the 1st of April 1923 after an exchange of gunfire with the military police who had been sent to capture him. His body was hanged in front of the Turkish Parliament and later buried in Giresun. He is considered a hero in Turkey where a monument has been erected to honor him.