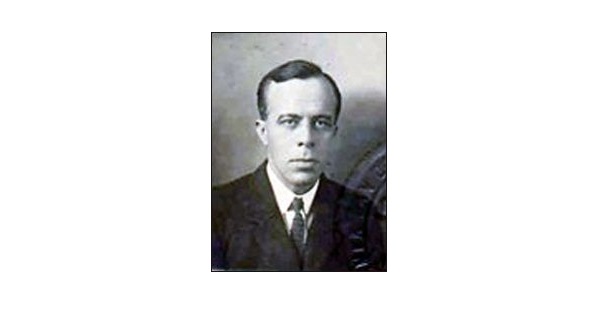 Mark Hopkins Ward was born in 1884 in Newton Center, Massachusetts. He and his twin brother Earl attended Amherst college and both graduated in the class of 1906. His father Langdon Storer Ward was treasurer of the American Board of Commissioners for Foreign Missions (ABCFM) and his mother Laura Arixene Bliss Ward was also a missionary. Mark Ward was a physician involved in overseeing medical work in countries such as Turkey, Syria, China, France and India.1

He first went to the Ottoman Empire (Turkey) in 1915 and remained there for two years working for the American Red Cross in Constantinople. After America's entry into the war, he joined the United States Army and after the Armistice (30 Oct 1918), he returned to do relief work and was stationed in Harput where he was a physician at the American Hospital. Ward was also Acting Director of the Near East Relief.2

During his time in Asia Minor, Ward witnessed the deportation of Greeks by the Kemalist Nationalists. The Turks expelled him and other relief workers for keeping notes on the deportations. In June 1922, just after his expulsion, Ward went to the British Foreign Office in London to report on what he witnessed in Asia Minor.3 He then traveled to Washington to report on his experiences and called for an independent commission of inquiry on the extermination of Christians in Asia Minor.

Upon his return, he helped raise funds for the Near East Relief. After leaving work abroad he served as medical secretary for the ABCFM until he died in 1952.

In a 1922 memorandum4, Ward described the suffering of the deportees:

As the deportees were driven down the road, many dropped by the roadside from exhaustion, and during the winter nights these froze to death as they had no covering. One American saw 1,500 dead bodies along the side of the road as he journeyed from Sivas to Kharput [Harput] during the month of December last. Another, going from Malatia to Kharput earlier in the same month, saw 150 bodies of women and children. Some of these bodies were on the roadway itself, just where they had stumbled and fallen. Others appeared to have had just enough strength to crawl to the side of the road so they would not be crushed by passing wagons.

In an interview with the Christian Science Monitor5 on the 21st of June 1922, Mark Ward stated:

If the people of America only knew how their Christian brethren are being slain in Asia Minor to satisfy the fanatical Kemalists' political aspirations, they would quickly answer the call of humanity, just as they did in the World War. The horrible facts are only now reaching the outside world; the Turks have censored all out-bound despatches. They have forced American relief workers to sign statements that there are no crimes being committed, under threat of dire punishment.

I do not believe that a majority of the Turkish people favour these atrocities. Many have told me as much. While Mustapha Kemal Pasha is the leader of the murderers, I am firmly convinced that he is acting according to a tacit agreement with the Government at Constantinople.

I was deported by the Turks, for no other reason except that I was administering relief to the Christian peoples under Turkish rule.

The Turkish Nationalists resumed their war of extermination against the Christian minorities, the Armenians and Greeks, nearly ten months ago, but they did not begin to make manifest open hostility toward their guardians, the American relief workers, until last fall, when the Kemalists came into power.

Our protests did not reach the outside world because of the Turkish barrier, and the news of the renewal of the Turkish campaign against the Christians only leaked out through my expulsion and safe arrival in Constantinople.

The Kemalists pursued with vigour their considered and systematic campaign for the extermination of the Greek minority in Asia Minor, which was attended with the same incredible brutality as marked the Turkish massacre of 1,000,000 Armenians in the early part of the Great War.

This war of extermination became more thorough as the Turkish Nationalists grew in power. It involved the deportation of the Greeks from their homes on the southern shores of the Black Sea, along the roads through Sivas and Harpoot to the mountainous region' east of Bitlis.

At first the male inhabitants were sent to the interior near Sivas and Harpoot, where I was stationed, and set to work on the roads. There was no shelter and little food, and during last winter men succumbed in large numbers.

The next step was to clear out the women and children from these same villages and the men from the coast cities of Samsun and Trebizond. Of 30,000 deportees who were driven from their homes in Sivas, only 20,000 arrived in Harpoot. All were destined for Bitlis, a heap of ruins left from the war, and in the centre of a barren, mountainous country unfitted to provide food for even one-tenth of the refugees.

The deportees were driven along the roads like so many herds of cattle. The herds of wretched beings stretched along the roads for miles. Some were permitted to have their ox-carts and donkeys, but mostly they were forced to trudge along afoot and were usually allowed to take with them what necessaries they could carry on their backs.

Every child able to do so was obliged to walk, for their mothers carried the food and scanty bedding on their backs. Herded thus on the road the deportees underwent a process of spoliation and murder.

I will never forget the sight of those long lines of poor mortals stretching into their exile in the mountains of Bitlis. They were passing into an absolutely barren country. The Turks knew also that Americans were eye-witnesses of these terrible things and our very presence was making them restive. They thought to discourage our efforts by placing all sorts of obstacles in the way of our relief efforts.

Naturally I am glad that the United States has joined the Commission to investigate the Turkish atrocities, but I must point out the need for prompt action if the whole truth is to be uncovered and this campaign of extermination of Christian people is to be checked.

I hope the Commission will push its work with all possible speed. Every moment's delay enables the Turk to remove or destroy the evidence. 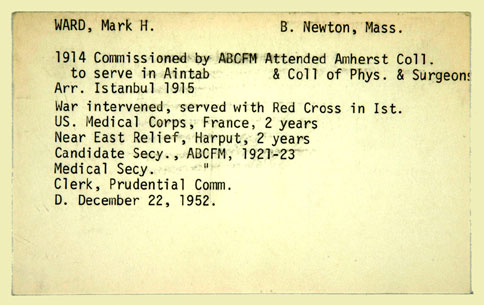 Personnel record for Mark H. Ward, an employee of the American Board.