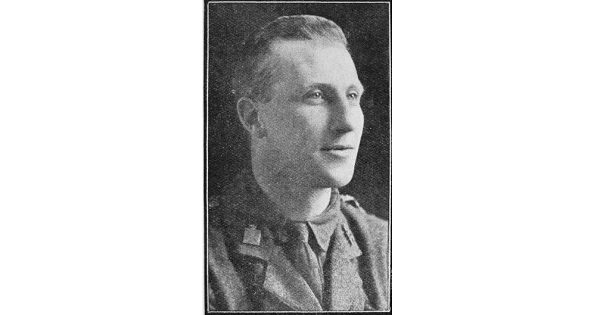 Reverend Charles James Hamilton Dobson (1886-1930) was an Anglican chaplain who was an eye-witness to the Smyrna Holocaust in September 1922. His testimony later played an important role in a trial brought on to determine the origins of the fire that destroyed the city. The trial concluded that the fire was deliberately lit.1

Dobson was born in New Zealand. During WW1, he served as a military chaplain on the western front and also at Gallipoli. He took up the Smyrna post in 1922 and was present during the Kemalist military advance on the city. Dobson witnessed the looting and the massacres and rendered assistance to terror-stricken Christians. He also buried the dead. He was evacuated from Smyrna on the 14th of September and arrived at Malta a few days later with his wife and two young children. Soon after escaping from Smyrna, Dobson learned that there were some who refused to accept that the Turks had set fire to the city. His account was published in 1923 in a piece titled The Smyrna Holocaust and describes his experience at Smyrna just prior to his escape.

I was in Smyrna when the Kemalist troops entered the city. For some days previous to this entry, there was increasing apprehension among the residents.[...]

The entry of the Kemalist cavalry came sooner than most of us expected. I personally became aware of their presence while returning from the Consulate through a back street. There was suddenly a lot of screaming, and a woman threw herself on her knees shrieking for protection. Next moment about a squadron of mounted rifles swept round the corner at an easy gallop; some held sabres; most carried rifles at the ready across the crupper. They pulled their horses aside to avoid riding down the woman at my feet. Up a side street I caught a glimpse of horsemen passing along the quay. They were walking and their rifles were slung. Further in the town I heard the trampling of hoofs, some shouting, and two or three shots. When I reached home I found the masses of people in the square full of terror. Already some Turkish civilians were beginning to loot and maltreat the Greek refugees. On the whole the entry seemed to me (speaking with a close experience of actual war) to have been accomplished with very little bloodshed about our part (the Point). [...]

I brought an injured man into my church: he died during the night. Next day, Sunday, I went to the Orthodox Church of St. John, which like all other churches was crammed with refugees, lying in appallingly insanitary circumstances and, terror-stricken, after a night of desultory rifle-fire and screaming. One of the priests volunteered to accompany me to bury the dead. The Turkish police commandeered a cart for us, and even offered us protection. We relied, however, on carrying the Union Jack. We found five bodies near the Aidin Railway Station. I do not think we missed many. With regard to burials, people kept coming to me and showing me bodies thrust behind hedges and in some cases lying in carts. I was particularly struck with one group consisting of women and babies, and a young girl, almost nude, shot through the breast, and with clotted blood on her thighs and genital organs, that spoke only too clearly of her fate before death. These bodies were buried by Orthodox priests. I moved about freely in the city and soon saw that the orderliness of the entry was due to the iron discipline, the exigencies of such a military entry demanded. The discipline, as far as relation to the civil population is concerned, became rapidly bad and worse. There was desultory shooting, looting and rape all over the place. The Armenian quarters suffered severely. It was reported that the Armenians refused to surrender arms and were throwing bombs. This may have been so, but what is undoubtedly true is that the Armenians were constantly being killed in their houses, their women folk ravished and their valuables stolen. In the back streets even nationals of the Great Powers were held up and looted of their money and their valuables. Armenians, gathered in one of their churches, refused to surrender; they surrendered finally on the promise of life for women and children; the men were marched away. We heard at the back of our house, one day, a lot of cheering in which  I recognised the Turkish word 'padishah' (Sultan, I think). On looking out, I saw about two hundred Greeks or Armenians kneeling and sitting on the road, guarded by Turkish soldiers. I afterwards learned from an absolutely unimpeachable source that these men were subsequently butchered. The method of killing, my informant told me, was by steel to avoid rifle fire. One could give a multitude of isolated incidents, which go to prove the absolute unleashing of lust and savagery among Kemalist troops. I mention but one: A child brought a message to me from the priests of an Orthodox Church, asking that I might come and spend the night with them in order to give them protection, because they had warning of a contemplated attack on the church, and they knew that on the previous night Turkish soldiers had burst into another church and there mutilated men and violated women.[...]

In the back streets there was, in some parts, a great running of terror-stricken people, carrying children and bedding; some of them had been injured; one man had his face smashed and his mouth bleeding. There was constantly shooting in the back streets, followed by screams and panic-stricken running. The Turks were openly looting everywhere. One man was shot through both thighs, one of which was fractured, his screams were unheeded by the terror-stricken people. The general atmosphere was terrible, and I began to fear that we might have left our retreat till too late. The fires broke out that afternoon. I was astonished when in Italy, and again here in France, to find how unwilling some circles were to believe the culpability of the Turkish troops in the burning of Smyrna. It seems to me the firing of the city by the fanatic element of the Turkish Army was the natural culmination of the breakdown of restraints imposed by military necessities, and of the unbridled indulgence of xenophobia. I have not yet met anybody who was in a position to know the circumstances, who does not contemptuously discredit the assertion that the Armenians fired the city.[...]

It is most significant that the fire shot up in several places with very little intervals of time and pointed to a systematic incendiarism such as only a well co-ordinated movement could have effected. Also, that the city was fired immediately after the changing of a wind that for the previous three days was in the general direction of the Turkish quarter. Any fire, previous to this change, would have swept the Turkish quarters. Independent witnesses, who have been at Smyrna since the fire, speaking of the unsatisfactory and lame stories of the Turks, tend to confirm their guilt in this matter. I have met, recently, a nurse, who left Smyrna ten days after the fire and who told me of her work in extracting bullets from bodies of wounded children, and who was a witness of the ravishing of Greek women. I mention this to show that the Turkish treatment of the Christian population was not a sudden excess, but a sustained policy.[...]

I have tried in giving this account to avoid being influenced by hostilty to the perpetrators of these horrors. Also, I have ommitted many small incidents that carry conviction to my own mind of the barbarity of the Kemalistic forces, but which it might be egotistical to dwell on.2

1. Hyslop, Joanna, A brief and personal account: the evidence of Charles Dobson on the destruction of the city of Smyrna in September 1922. Modern Greek Studies, Vol. 16–17, A (2013–14).
2. Rev. Charles Dobson, The Smyrna Holocaust appendix in Lysimachos Oeconomos, The Tragedy of the Christian Near East, London 1923, pp. 21-29.